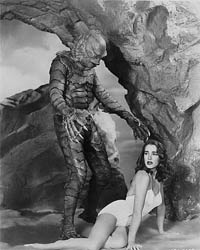 • The Man in the High Castle gets turned on its head in these maps that imagine a post-war Europe without Germany.

• Mad Men actor Jon Hamm talks to io9 about The Day The Earth Stood Still and explains that what Klaatu really needs is scotch and cigarettes.

• Biology in Science Fiction talks about the evolutionary origins of The Creature from the Black Lagoon. Funny, I didn’t know rubber and latex could evolve.

• A man in Arizona has some wicked cool alien steampunk art.

• Slice of SciFi’s Sam Sloan freaks out about the defense department’s MKV, viewing it as the precursor to a real-life Skynet.