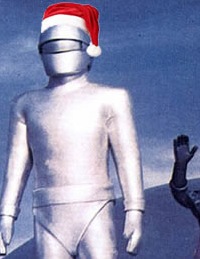 • In 1981 Fox Studios commissioned Ray Bradbury to pen a sequel to The Day The Earth Stood Still, which features a Christmas love story. Have a holly jolly Klaatu.

• Paramount’s Blu-Ray release of Star Trek VI: The Undiscovered Country will include a DVD extra of two scenes from Hamlet performed in “the original” Klingon: “TaH pagh, taH be!”

• If you want to catch up on some of the lesser known Star Trek canon, Peter David’s old Trek comics are iPhone ready, available on iTunes for $0.99 a volume.

• Gaius Baltar (of course) says Hitler would have loved the Battlestar Galactica finale. I knew there was a reason I stopped liking the show after the third season.

• Star Wars goes Chaplin-esque silent. If only George had picked up this trick for the prequels, we might have been spared Anakin’s incessant whining.