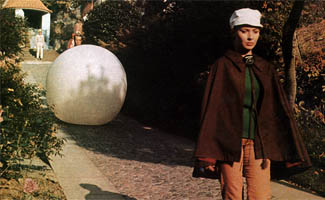 Fans of the 1960s series The Prisoner are getting more than the AMC remake: Real-life Rovers are also in the works. Rhodri Armour, a PhD student from the University of Bath, has created the first robot that can jump and roll, just like The Village’s iconic prison guard.

The Jollbot, Armour’s thesis project, is an all-terrain robot designed specifically with space exploration and land surveying in mind. Shaped like a spherical cage, it has the maneuverability of wheels without the problem of overturning or getting stuck. And, like the Rover, this round surveillance robot can jump over obstacles to go where no robot has gone before.

“Others in the past have made robots that jump and robots that roll; but we’ve made the first robot that can do both,” said Armour.

The Prisoner‘s Rover was in fact a weather balloon (a last minute replacement after the original wheeled prop went into the water and never came out. Special effects and a bit of imagination gave that balloon the power to move, but there are no strings pulling this one along.

“Before jumping, the robot squashes its spherical shape,” explains Armour. “When it is ready, it releases the stored energy all at once to jump to heights of up to half a metre.” The idea comes from the way a grasshopper stores muscle energy and then rapidly releases it to make the jump. The difference, explains Armour, is that the Jollbot “uses electrical motors to slowly store the energy needed to leap in its springy skeleton.”

In its current form the Jollbot looks pretty harmless. But Armour explains that future iterations could include, “A stretchy skin covered in solar cells on the outside of the robot, so it could power itself, and robotic control sensors to enable it to sense its environment.” Sound familiar?

It’s only a matter of time before the Jollbot will “be seeing you.”