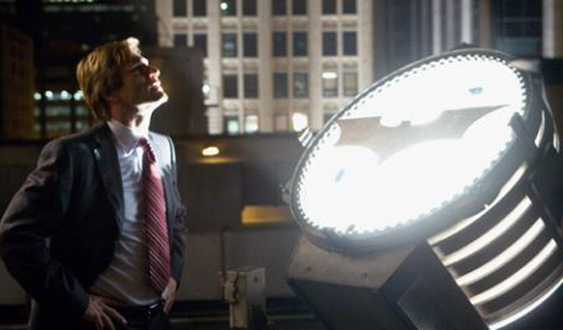 My fellow geeky Americans. On this election day, cast your vote for the one candidate that will put an end to the diabolical Skrull invasion: Stephen Colbert. His powers of “truthiness” are mightier than even the Mighty Thor, and — oh wait. He’s only running for president in the Marvel Universe. Yes, comic books and politics often make for strange bedfellows. But as comic book films have matured their creators have begun to tackle real world issues with greater success. Let’s take a look at the times where the melding of superheroes and politics worked, the times where they fell embarrassingly flat, and sneak a peek into the future of political heroes.

The Dark Knight (2008)
Delving into everything from the ethics of wiretapping to the evolving nature of heroism in a darkening world, The Dark Knight inspired more political debate than any popular movie in recent memory. It also handled its topical themes in a less heavy-handed fashion than the recent spate of political thrillers like Body of Lies or Lions For Lambs. No comic book flick to date has succeeded so brilliantly as both pulp entertainment and conversation-starting thinkpiece. Whether you view Batman as a Cheney/Bush metaphor, or just, you know, as Batman, there is certainly no denying that The Dark Knight was the most politically relevant film of 2008.

X2: X-Men United (2003)
The X-Men are easily the most politicized superhero team, their status as outcasts having allowed commentaries on prejudice and social injustice for decades. X2 ably juggled social commentary with special effects, as in the scene where Bobby Drake, aka Iceman, “comes out” as a mutant to his close-minded family. (Incorporating Senator Kelly from the comics into the first film was also an interesting move, though I wish he were better utilized throughout the trilogy.) The X-Men films have yet to fully delve into the Mutant Registration Act — a major story element in the Marvel Universe that was recently adapted into the Superhero Registration Act — so there is still room for future political allegory should the mutants return to the big screen.

Superman IV: The Quest For Peace (1987)
The Cold War gave us a great villain in Batman‘s KGBeast, and a terrible one in Superman IV‘s Nuclear Man (played by the wonderfully named Mark Pillow.) Created as a result of Superman tossing all of the world’s nuclear weapons into the sun, Nuclear Man is perhaps the most blatant political metaphor in all of film history. (Thankfully, the failure of Superman IV closed the door on Abortion Man and Mr. O-zone.) The movie even awkwardly tackles mainstream media, with The Daily Planet being turned into a sleazy tabloid by its Rupert Murdoch-esque owner. Today, Superman IV‘s attempts at political commentary are more dated than Mr. Pillow’s nuclear mullet.

Captain America (1990)
Besides inexplicably changing the Red Skull’s political leanings (for some reason, he’s now an Italian facist), this infamous direct-to-video debacle also rode the eco-friendly craze of the early ’90s. A newly unfrozen Cap must protect the environmentally-friendly President Kimball from Red Skull, who is now secretly working for the world’s military industrial complex. Lest you miss the film’s heavy-handed message, a plea to support 1990’s Environmental Protection Act is tacked on to the ending. A Captain America film should certainly tackle politics, but with a subtler script and more convincing Red Skull make-up.

What’s next for politics in superhero films? Watchmen certainly has its fair share of Cold War-era satire (and its depiction of the right-wing/left wing media is still spot on), so it will be interesting to see how the upcoming film handles Moore’s political bent. And then there’s Brian K. Vaughan’s Ex Machina, which follows a former superhero turned mayor of New York City that is basically The West Wing on Powers. Vaughan’s series pulls no punches, delving into everything from homeland security to the legalization of marijuana. Rumors of a film adaptation have swirled, but Vaughan is currently busy with his duties writing for Lost and adapting his other hit series, Y: the Last Man, into a Shia LaBeouf vehicle. The smart, action-packed Ex Machina could pick up the reigns of The Dark Knight and continue to take comic books films to even more thought-provoking places.

When not writing, Nick Nadel is in line at the comic book store alongside the other geeks, er, fans of speculative fiction. His most prized possession is a 1960s Batman comic wherein the Dynamic Duo are trapped inside a fortune cookie factory. He lives in Brooklyn and updates his aptly named website (nicknadel.com) with comedy writing and videos.