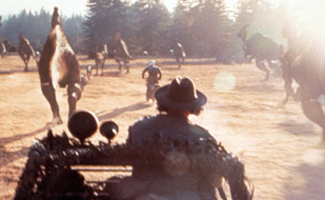 In the movies pre-historical animals can be an unfriendly bunch, ones who don’t take kindly to being disturbed by curious humans. The Lost World , the 1925 silent film based on the Arthur Conan Doyle story, is one of the earliest examples of this: Explorers discover a hidden colony of dinosaurs, and are promptly attacked by the beasts.

So what happens when scientists decide to forgo the exploring part and replicate the dinos in a more controlled environment? Relations only get worse.

Take, for example, Jurassic Park .
Using dinosaur DNA, scientists clone several dinosaurs in order to set
up a theme park. The first people to the park, of course, are eaten. In
Sabretooth ,
prehistoric DNA is utilized once again, this time to give rise to a
sabretooth tiger, who breaks free from its lab, and starts stalking
human prey. The 2005 movie Attack of the Sabretooth took the
key parts of both of these movies, and set the cloned sabretooths at a
theme park — this time in Fiji. Chaos, brought on by a power failure, ensues.

So why do these prehistoric beasts, who have never encountered
humans, immediately default towards eating us? Are these pre-historic
animals just acting on their predatory instincts? Are humans that
delicious? Or maybe it’s the time-tested adage, “Man was not meant to
meddle in such matters.” Whatever the reason, as a general rule: Don’t
clone an extinct creature… or at least not until science perfects a
truly foolproof security system. And don’t even get us started on the problems that come with cloning humans.

Find out just how the Sabretooth stalks his prey. Click here to see a full schedule of Sabretooth on AMC.