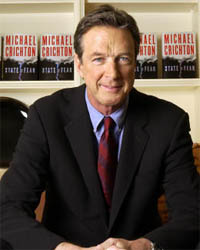 The first “adult” book I ever read was Jurassic Park. I was ten years old, and my mother hesitated buying me a novel of which she was convinced I would read ten pages before retreating into the works of R.L. Stine and Bruce Coville (My Teacher is an Alien? Best Young Adult Book Ever). But I devoured Jurassic Park, cherishing every page as if I had just found religion. It helped I had already seen Steven Spielberg’s adaptation , but there was something about the writing that was not only accessible to 10-year-old me, it made me feel as if I was mature enough to understand something I was certain most people couldn’t. Extracting DNA from a mosquito and cross-breeding it with a frog to create a dinosaur? It was simply that easy.

Over the years as I worked my way through his entire body of work, I would learn that was his extraordinary gift — the ability to turn Stephen Hawking into James Patterson so the rest of us could feel we understood the world just a little bit better. Reading The Andromeda Strain I became a biologist, The Terminal Man a neurologist. With Prey I was an expert in the field of nanotechnology, with Timeline a genius in Quantum Mechanics. It was simply that easy.

And entertaining. Because while his books were feeding me information about burgeoning fields of science, they were also opening me up to a whole new world of action and violence, all meticulously described on the printed page. No other author could so seamlessly blend a brutal serial killer with a chart of brain waves, a strand of DNA with death by Raptor disembowelment. Think nanites aren’t scary? Read Crichton’s vivid description of a swarm of them infesting your lungs.

In his later years, Crichton came under attack for inserting his own political philosophies into his work. His novel State of Fear depicted global warming as a conspiracy cooked up by scientists eager for funding. The book’s stance earned him a one-on-one with President Bush and a subpoena to testify before Congress. For some, this was an outrage. For me it was excuse for praise — not because I aligned with his beliefs, but because it illustrated how convincing his science fiction was, that both Congress and heads of state would turn to him for advice.

Crichton’s work represented a lot of firsts for me. The first sex scene I ever read was in his corporate drama Disclosure — I’m not ashamed to admit I read that chapter more than a few times. The first non-fiction book I ever read for pleasure was his autobiography, Travels. I would eventually grow up and learn to read his books with a growing amount of skepticism, but the magic has never died for me. I’m still the first in line when his latest book hits the shelves. I know I’ll be there next year when his last book does.