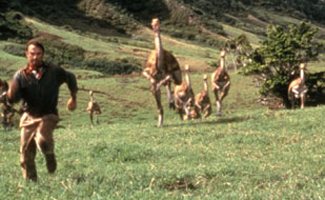 Michael Crichton is no longer with us but his science fiction remains and it’s more prescient than ever. Remember a little thing he wrote called Jurassic Park? Well, thanks to a new development in cloning, a planned Pleistocene Park (future home to revived extinct animals like the mammoth, woolly rhinoceroses, and even saber-toothed cats) is one step closer to reality.

Japanese scientists successfully cloned a mouse from one that had been frozen at minus 20 degrees Celsius for sixteen years. The team, led by Teruhiko Wakayama, published their findings in the Proceedings of the National Academy of Sciences on Nov. 4 and say the discovery increases the possibility that extinct animals, such as mammoths could, perhaps, be resurrected.

The method they used goes beyond what was done to create
the first cloned animal, Dolly the sheep. Nuclei from brain cells of
the frozen animals were collected and injected into empty eggs whose
own DNA had been removed, to generate cloned embryos. Then there was a
second round of cloning that used the stem cells taken from the embryos.

Don’t
buy your plane ticket just yet — there are still obstacles to overcome.
First, scientists would have to find a frozen sample. Akira Iritani, a
member of the Mammoth Creation Project is optimistic about that
creature’s chances because, “It’s said that there are more than 10,000
mammoths lying underneath Siberia.” But even if they find a sample,
corpses frozen in permafrost for several thousand years are likely to
have damaged cells and DNA. And splicing in DNA from a similar animal
(a frog’s DNA is used to fix the dino’s damaged DNA in Crichton’s book)
would create a new hybrid creature — not the animal intended.
Furthermore, even if the DNA was fine, there’s the problem of finding
surrogate egg donors and mothers to use in the cloning process. Will an
African elephant someday be the mother of a mammoth? With a little luck
and a little more progress, it could happen.

Jurassic Park
took place off the coast of Costa Rica. This fantasyland is planned for
northern Siberia, but that’s about the only major difference. There
might not be mosquitoes involved in this cloning process but don’t
forget the big picture — Crichton never did: These animals aren’t
dinosaurs but they’re still dangerous. Perhaps scientists didn’t read
through to the end of the book… Let’s hope they don’t make the same
mistakes made by John Hammond.