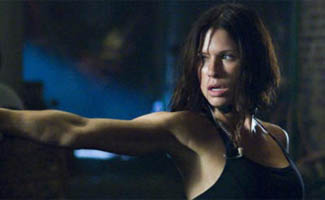 Technogeeks this week are abuzz over Tanya Vlach, the one-eyed San Francisco artist looking for a better way to use her prosthesis. She’s already got one that can dance, but now she’s looking to turn it into something more useful: An eye camera, which would record her life from the missing eye’s perspective and transmit those images directly to a phone or computer.

The 2008 movie Doomsday demonstrates just how useful this kind of artificial eye can be. Set in 2035, Major Eden Sinclair’s prosthetic is aesthetically pleasing and helps her in combat. She simply pops it out of its socket, rolls it down a hallway, and a digital monitor on her wrist shows her who or what is hiding ahead. More importantly (spoiler alert), when she’s wearing the eye, it records conversations with bad guys that she can later use to expose them. How often must that come in handy?

“I am interested in capitalizing on the current advancement of technology to enhance the abilities of my prosthesis for an augmented reality,” she says on her blog One-Eyed. In plain speak, she’s looking for one that can dilate with changes in light and allow her to control its zoom, focus, and power switch with the literal blink of an eye.

Of course, a video camera in her eye wouldn’t turn her into an action star, but Vlach (a self proclaimed scifi geek) says she’s excited about the myriad possibilities for it. “There are a lot of ideas floating around…nothing too exploitative,” she tells the New York Daily News. “I don’t want to be a spy and infringe on people’s rights.” Roy Want, a senior principal engineer at Intel, thinks at the very least the camera could help her memory. “You’d never lose anything,” he claims. “You could ask it, ‘Where was the last time I saw my keys?'”

It’s certainly a way to turn a negative (losing an eye in a car accident) into a positive (becoming a cyborg). One obstacle engineers helping her with the project have to overcome, however, is the shape of a traditional camera: Digital and video cameras use flat surfaces to record images, which wouldn’t fit so well in an eye. If only there were some sort of hemispherical camera they could use…

How would you use your eye-cam?