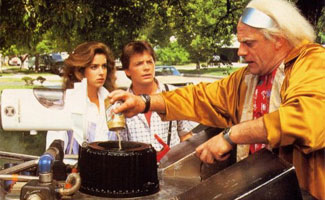 If Doc Brown and Marty McFly can use trash to power a time machine you’d think we’d be able to use it to power a television. I mean, we don’t need to go Back to the Future or anything, we just need to keep the lights on. Is that too much to ask? One company doesn’t think so.

Jacoby Group’s Atlanta-based Geoplasma intends to set up plasma refuse plants in the United States to transform ordinary garbage into usable energy.
It’s not exactly the same technology as the DeLorean’s “Mr. Fusion,” but it couldn’t be easier for the consumer: Simply place your trash on the curb and the plant’s “Gasifier” turns it into power. More specifically, the garbage is fed into a 10,000 degree Fahrenheit stream of plasma, which causes organic compounds to vaporize, creating a syngas that can be cleaned and used to run an electric turbine.

Residents of St. Lucie County, Florida will be the first to try out this innovative approach to waste management. According to Scientific American, the plant is scheduled to go online by 2011, processing 1,500 tons of garbage a day and producing 60 megawatts of electricity for the power grid — that’s enough to power 50,000 homes. And with the average person easily throwing out 4.5 pounds of trash every day, everyone can do their part to keep the power grid going.

Surprisingly enough, the technology isn’t new — NASA’s been using it for 40 years to test their spacecrafts’ heat shields — though until now it’s been deemed too expensive for widespread implementation. But with Geoplasma promising similar prices to natural gas and environmental concerns being what they are, Doc Brown’s seemingly kooky scheme may be worth trying today. Emissions from a plasma refuse plant are far lower than in standard incineration plants, and the process reduces landfill volume and methane release. Doc may have used trash to travel to the future, but now we’re using it to make sure there is one.