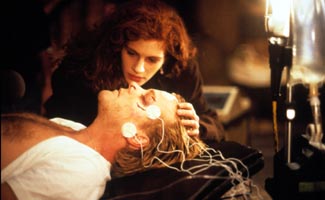 Remember Joel Schumacher’s 1990 movie Flatliners ? Basically, Kiefer Sutherland and his fellow medical students are curious about the afterlife, so they stop their own hearts, take a look around and then resuscitate each other. Smart, right? Well, The Human Consciousness Project thinks so, and is starting the world’s first large-scale scientific study of what happens when we die. This time, however, they won’t be using overeager medical students, but rather hospital patients in cardiac arrest.

Explains Dr. Sam Parnia, director of the Project and leader of the AWARE (Awareness during Resuscitation) study, “During a cardiac arrest, there follows a period of time which may last from a few seconds to an hour or more in which emergency medical efforts may succeed in restarting the heart and reversing the dying process. What people experience during this period provides a unique window of understanding into what we are all likely to experience.”

While studies show there is no brain activity during this time, 10-20% of those who go through clinical
death report lucid, well-structured thought processes, reasoning,
memories, and sometimes even detailed recollections of their cardiac arrest. How
can they report this high-level of consciousness in the absence of
measurable brain activity? Dr. Parnia hopes to find out.

Twenty-five medical centers throughout the United States, Canada,
and Europe will be looking at 1,500 resuscitated patients. Doctors will
use state of the art technology to study the brain during cardiac
arrest, and then discuss the experience with those who are willing.

One
area the team will be examining are reports of so-called “out-of-body
experiences.” To test if they are real, pictures that are visible only
from above will be placed around the areas of the hospital where heart
attacks occur most frequently (emergency and intensive care units).
Patients floating above their body should notice these images. If they
do, it will prove their mind traveled outside of their body. If they
don’t, the study will conclude that the floating effect is a trick of
the mind.

“The study aims to settle this debate once and
for all,” says Dr. Parnia. “It may be that out-of-body experiences are
false memories, but until that has been scientifically tested we can’t
say for sure.” Over the next three years he and his team hope to turn
such philosophical discussions into scientific ones.