Rarely does a superhero hit the multiplexes without first visiting the comic book shelves, but you have to admit it’s neat to see an original creation on the big screen. That said, Hancock (out on DVD today) was a disappointment on multiple levels. We were promised Will Smith as a drunken, belligerent superhero in a film that would skewer the conventions of the cape and cowl genre. What we got was a formulaic, muddled action movie with stabs at epic grandness that just came off as pretentious. If Smith insists on doing a Hancock sequel, perhaps he should take a look at the following five superheroes, with no bookish backstory.

Darkman, Darkman
They say, “Steal from the best.” And in creating his unforgettably creepy anti-hero director, Sam Raimi took inspiration from two heavy hitters: Batman and The Shadow. Instead of merely lifting The Shadow’s master of disguise abilities, Raimi and his screenwriters added a unique twist: synthetic skin masks that will disintegrate if he keeps one on too long. To top it off, the character’s look is a nifty melding of classic pulp and modern-day scares: under those bandages is a truly terrifying man yet to
be rivaled in sheer awesomeness. Hancock’s powers aren’t really all that unique — they’re basically Superman’s. Plus, his costume looks like a cast-off from X-Men 3 .

David Dunn, Unbreakable
M. Night Shyamalan’s follow-up to The Sixth Sense is one of the most moving superhero flicks to date. Bruce Willis’ indestructible Wolverine stand-in shares Hancock’s search for meaning and the world Shyamalan creates is incredibly grounded. Yes, Dunn’s psychic abilities are a bit Dead Zone , but the reveal (Spoiler alert!) that “Mr. Glass” has caused the disasters that have given the hero a sense of purpose make for a strikingly melancholy ending. This is how you do “sad superhero” right. 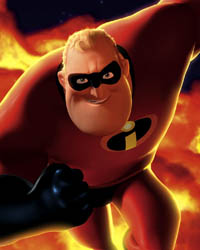 In Brad Bird’s 2004 masterpiece, Bob Parr (aka Mr. Incredible) is such a well-rounded character — a loving family man who’s simultaneously a portrait of suburban unease — that suddenly Smith’s alter ego looks as realistic as the Silver Surfer. Like many superheroes, Mr. Incredible has super-strength and invulnerability, and simply awaits a chance to use them. He’s the perfect metaphor for our collective longing to be more powerful in our day-to-day lives.

Captain Invincible, The Return of Captain Invincible
As far as drunken superheroes go, Alan Arkin ( Little Miss Sunshine ) beat Will Smith to the punch in this 1983 musical fantasy. The reason? It doesn’t take itself so damn seriously. The Return of Captain Invincible skewers both comic book givens (Invincible is accused of wearing underwear in public) and Cold War paranoia. The movie even includes a scene where the great Christopher Lee, playing the archnemesis Mr. Midnight, extols the virtues of alcohol via a campy show tune. Sheer comic genius. Where was the sharp satire everyone expected from Hancock? Maybe on the DVD’s special features.

The Strobe, The Specials
Thomas Haden Church’s pompous leader of a less-than-extraordinary superhero team is just one of the many unique creations in this underrated comedy. Strobe may be an arrogant caped doofus, but underneath it all he’s nothing but pain and self-loathing. His wife, Ms. Indestructible, is cheating on him, and worst of all, he can’t even get a decent action figure made in his likeness. Hancock’s self-mockery wasn’t pushed to absurd enough levels. Instead, he was mopey and depressed — and no one wants to see a Super Eeyore.

When not writing, Nick Nadel is in line at the comic book store alongside the other geeks, er, fans of speculative fiction. His most prized possession is a 1960s Batman comic wherein the Dynamic Duo are
trapped inside a fortune cookie factory. He lives in Brooklyn and updates his aptly named website (nicknadel.com) with comedy writing and videos.