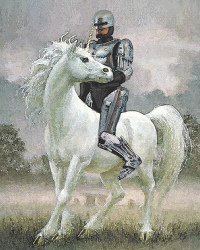 • Marvel Hobos may seem ridiculous. But after Marvel Apes, would you really be surprised?

• Is there anything more regal than Robocop riding a unicorn?

• An enterprising toy maker has constructed action figures of Spike and Daniel Witwicky in their clunky exo-suits from the 1986 Transformers animated movie. The best part? Daniel actually transforms, and Shia LaBeouf is nowhere to be found.

• This photo of the original Star Trek
cast posing in front of NASA’s actual Space Shuttle Enterprise is
further proof that they were the coolest group of people ever assembled
for a television show. Will you look at Nimoy’s shirt? Come on!

• As if the Teenage Mutant Ninja Turtles concept wasn’t strange enough, here’s the intro
to their Japanese cartoon. The show gives them magical stones,
transforms them into “super turtles,” and generally makes very little
sense.

• This energy conservation PSA
starring Captain America is more topical than ever. Thermal Thief,
Wattage Waster, and Cold Air Crook are still up to their old tricks.