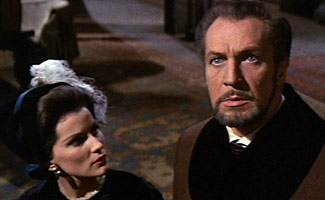 Don’t let the title fool you: Roger Corman’s The Haunted Palace is based on the work of Edgar Allan Poe in name only. Though his Poe pictures were successful, Corman wanted to tackle H.P. Lovecraft and adapted his novella “The Case of Charles Dexter Ward” for the screen. American International Pictures didn’t want to mess with a good thing, however, and slapped the Poe title on it, marketing it as another in Corman’s series. Despite this misleading title and some disjointed Poe verse tacked on to bookend the movie, The Haunted Palace is dark, moody, classic Corman.

The movie opens in the small village of Arkham in the late 18th century. Cloaked figures walk the fog-shrouded streets, and the citizens are deathly afraid of “the devil himself,” Joseph Curwen (Vincent Price). Curwen lives in a large palace that looms over the village; he’s rumored to be a warlock, but the only thing folks know for sure is that he owns a copy of the Necronomicon, and young girls who wander into the castle emerge hours later with no recollection of what went on inside. The villagers join together old-fashioned angry mob-style, complete with the requisite torches. They pull Curwen from his palace and set about burning him in the town square, but not before he can spout off a few promises from the pyre: He will return, and he’s totally putting a curse on them, their children, and their children’s children. Curwen stops there and is soon engulfed in flames, but one can assume that their children’s children’s children are also at risk.

A century later, Charles Dexter Ward (Price again) and his wife Ann (Debra Paget) have inherited the spooky palace on the hill. They arrive in Arkham to find dark streets, suspicious villagers, and a pub with the macabre name, “The Burning Man.” They find a manservant, Simon (Lon Chaney Jr.), waiting for them and, despite some reluctance, they settle in to the drafty old place. Charles finds himself drawn to the creepy portrait of Joseph Curwen that hangs in the hall; before long, it seems that the elder Curwen is intent on making good on his curse by possessing the body of his kind-hearted kin. What will the villagers do when their worst nightmare comes to pass and Curwen returns? And what in the world is making those monstrous sounds in that pit below the palace?

There’s plenty to love about The Haunted Palace, from the talk of Lovecraft’s elder gods Cthulhu and Yog-Sothoth to Price’s subdued Jekyll and Hyde performance to the genuinely eerie sequences in the foggy streets, where we learn that Curwen’s curse is very much alive in the children of Arkham. One of particular note finds Charles and Ann surrounded by all manner of shuffling, deformed villagers; it’s positively chill-inducing. But The Haunted Palace also features some of Roger Corman’s trademark padding: There’s a lot of quiet walking through the limited sets. It grinds the action down to a crawl at times, but the movie is still some good old-fashioned horror fun… like a torch-wielding angry mob.