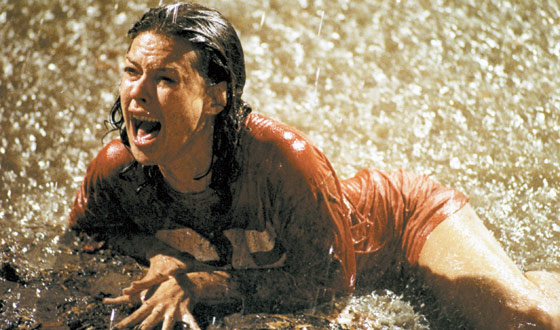 I know people who get all angried up if they watch a horror movie and there’s no gore — particularly if it’s a slasher flick. I also know people who freak out and squinch up their faces the moment a bit of red splashes across the screen. Personally, I fall somewhere in the middle: I don’t think gore is essential to horror, but sometimes it’s definitely welcome. (I’ve sat through a few recent PG-13 offerings where the action cuts away seconds before the money shot and I’ve been surprised to find myself disappointed.) See, I’m not usually one to pine for explicit violence, but once in a while I revel in it. You know how it is, sometimes you feel like a nut, sometimes you’d rather punch yourself in the face… or maybe that’s just me.

It’s odd, but lately I’ve actually spent quite a bit of time ruminating on gore and my relationship with it as an audience member. Why do I like what I like? Why would I sometimes prefer to do without? What I’ve learned in the process is that the more cartoony and ridiculous the gore, the more I apt I am to enjoy it. The realistic stuff, the torture stuff, the lingering violence…it doesn’t really do much for me. While there are always exceptions to the rule, I think that basically it comes down to this: Knives peeling away skin, no thanks; exploding heads, yes please. Simple enough, right? Bearing all this in mind, here are some of my favorite gore moments.

The Thing
It’s impossible to choose just one effect from F/X guru Rob Bottin’s big bag
of grossities. Is it the head that detaches from the body, flips upside down, becomes a spider-thing, then crawls away? Is it the chest cavity that suddenly bites off someone’s arms? I suppose my vote goes to the dog that has evil alien flapping spaghetti coming out of its back. That’s the point in the m vie when you realize that all bets are off, that The Thing is going to be like nothing you’ve ever seen before, and that your mind may very well melt from all the gnarliness about to unfold.

Scanners
Speaking of exploding heads… David Cronenberg’s Scanners features the mack daddy of ’em. Michael Ironside just keeps staring and staring and staring and the tension builds and ka-blam, there’s head
chum everywhere. It’s a seminal horror movie sequence — for years and years I had no idea what Scanners was about, but I knew it featured someone’s head exploding. Exploding heads can make any movie awesome. It’s a scientific fact! I would have plunked down $10 to see Erin Brockovich if I knew the head of Julia Roberts would explode. $20 even.

Poltergeist
A PG-rated flick made the list? Well, sure it did. The scene where the guy pulls his face off so that chunks plop in the sink sent me to the drive-in bathroom for fear I was gonna yak when I was a kid. You know that damn well earns Poltergeist a spot on this list.

Day of the Dead
Pretty
much any George Romero-helmed zombie movie gives gorehounds what they want each time the director busts out his “feast scene.” This usually appears late in the film, after our hero’s’ best laid plans go to
hell and the zombies have overrun the safe haven outpost; often, the person getting explicitly dined upon is someone the audience has grown to hate throughout the proceedings. In Day of the Dead, it’s both the evil Captain Rhodes and the annoying Private Rickles. For my money, though, Day‘s greatest gross-out moment occurs when a zombie sits up on a gurney and his guts fall out then splash on the floor; Romero must have loved this sequence, too, for he recreated it 20+ years later in Diary of the Dead .

Friday the 13th
I still marvel at Tom Savini’s work in this film. To me, it’s the epitome of “How the frig did he do
that?” It’s all so seamless and realistic… I know it’s fake, but Savini manages to pull off the ultimate magic trick in any number of kill scenes. When a post-coital, pot-smoking Kevin Bacon finds his bliss interrupted by an inconvenient arrow through the neck, I simply can’t figure out the illusion.

There
are plenty of other memorable gore moments I’ve neglected to mention here, from the infamous “broken wood meets eyeball” sequence in Lucio Fulci’s Zombi , or pretty much all of Peter Jackson’s Dead Alive …although now, I suppose, I’ve gone and mentioned them. Whoa! So before this
column becomes a total Mobius strip and folds back in upon itself, tell me: Where do your loyalties lie in The Gore Wars? What are your favorite gross-out moments in horror? When do you turn your head in fear?