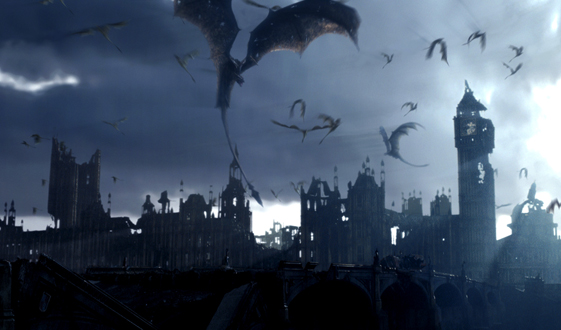 It’s only fitting there are so many contradictory fictional takes on the dragon. Even the dragon’s mythological and etymological origin is a mystery. Homer’s first and only mention of the dragon was as an insignia upon Agamemnon’s shield, whereas, in Asia, they are shape-shifting serpent gods. Cryptozoologists bicker about whether or not all dragon myths come from the komodo of Indonesia, while psychologists wonder if the beast is the supreme anthropomorphization of all of mankind’s primal fears: the venom of the snake, the teeth of the crocodile, the claws of the lion, the wings of the vulture and the mindless fury of the wildfire.

Fantasy’s adoption of this supreme monster is well known, of course. J.R.R. Tolkien embraced the dragon as the major nemesis of his 1937 fantasy novel, The Hobbit… a deathly species of serpent gods, whispered about through the rest of his Middle-Earth works. Tolkien being the wax mold for most of fantasy’s cliches, the dragon has been imprinted upon the rest of the genre, from Dungeons and Dragons to the Harry Potter novels.

But scifi has done clever things with the dragon in frank disregard to its zoological classification as a fantasy-only beastie. Perhaps the first science fiction visionary to adopt the dragon as his own was John Wyndham, author of Day of the Triffids and The Midwich Cuckoos. In Wyndham’s 1953 novels, dragon-like aliens plummet into our oceans and quietly begin building a civilization at its most crushing depths. Man, of course, pokes his nose in, which prompts the Kraken to go on the attack, melting the ice caps with their fire to drown us (an interesting plot device, soothsaying fears of global warming!). It’s a clever novel, like most of Wyndham’s, but for some reason, it never caught on, and dragons were ignored by science fiction authors for the next 15 years.

But when American scifi novelist Anne McCaffrey dusted the dragon off as the primary plot device of her Dragonriders of Pern novels, she kept the dragons extra-terrestrial origins while rejecting their malevolence. She moved the dragon away from Earth to an extra-solar planet called Pern, settled by futuristic humans who have regressed to a feudal state through the constant assault of an alien threat called The Thread… a sort of extraterrestrial weed that rains upon Pern and kills all life that it touches. The settlers of Pern are only saved by the taming and mounting of dragons who can fly through the air, burning up the Thread with their flame before it lands. The idea was well beloved: Although no movies or television series have been made of McCaffery’s series, eighteen novels have been published about Pern.

Movies have not neglected the dragon either… even scifi movies. Genre schlock master Larry Cohen directed Q: The Winged Serpent in 1982, which has since become a cult classic. The premise is wonderfully absurd: The Aztec Quetzacoatl is resurrected by a cult in New York City and takes up roost in a skyscraper, bizarrely portrayed by the Chrysler Building. The movie features a small but earnestly portrayed role by Michael Moriarty as a criminal trying to bribe the city with the dragon’s whereabouts, prompting critic Rex Reed to famously say to Q producer Samuel Z. Arkoff: “All that dreck — and right in the middle of it, a great method performance by Michael Moriarty!” Arkoff’s sanguine retort? “The dreck was my idea.”

Reign of Fire never takes its central conceit too seriously. It is not high drama. It is not apologetic. It is about Matthew McConaughey blowing up wyverns with bazookas, and it revels in it.

Click here for the full schedule of Reign of Fire on AMC.