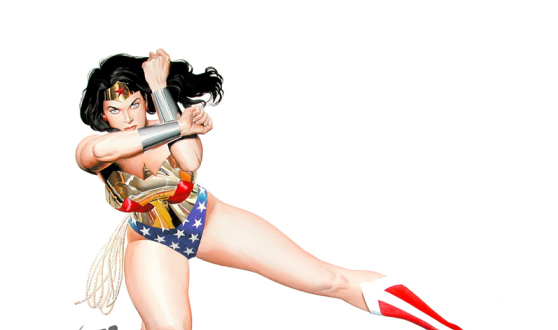 What does it say about our society that Blade has three cinematic outings under his vampire-slaying belt, while Wonder Woman has zero? Shouldn’t we have a Wonder Woman movie by now? Why is she so difficult to bring to the big screen? It’s certainly not for lack of trying: Everyone from Aaron Spelling to Joss Whedon has attempted a movie adaptation. (Spelling’s proposed project, starring Raquel Welch, would’ve no doubt resulted in a kitschfest of near lethal proportions.) Whedon’s departure caused massive weeping in geek circles (you’d be hard pressed to find a writer-director better suited to the character), but the possibility of a Wachowski Bros directed film has reignited interest in the Amazonian warrior-princess. Before they botch things up, let’s take a look at the “dos and don’ts” of bringing Wonder Woman to the big screen.

Skip the Origin Story
Unlike Batman or Superman, Wonder Woman’s backstory is sort of a mess. First of all, if you’re going to follow her comic book origin to the letter, she has to be molded from magic clay. There’s no way that’s gonna fly in a movie. So let’s just skip the creation myth and get right to the action: Diana Prince juggles her duel life as a government agent and a world-renowned superhero, while also balancing her responsibilities to her Amazonian heritage. Nix her rather lame rogues gallery (is anyone really dying to see Cheetah on film?), and make the enemy a militant faction of the Amazons set on overthrowing our patriarchal society. Throw in a romantic relationship with fellow agent Steve Trevor, and you’re off to a good start.

Check out the Recent Comics
One of the problems Joss Whedon encountered while attempting his take on WW was the lack of definitive comic book stories. There is neither a Batman: Killing Joke nor a “Death of Gwen Stacy” to give screenwriters inspiration. Until recently, the only readable Wonder Woman comics were from George Perez’s late ’80s run on the title. Gail Simone, the first female writer to tackle the character on a monthly basis, is currently writing stories that should also stand the test of time. Streamlined and action-heavy, her work gets to the core of the character. Ditch the World War II-era take of the recent script, and just adapt a few of these refreshing tales.

Keep the Lasso, Scrap the Invisible Jet
Comic book writer William Moulton Marston had a hand in inventing a real-life lie detector, which explains why his character Wonder Woman carries a magic lasso that forces whomever it catches to tell the truth. (Marston was also an early proponent of bondage and polyamorous relationships, if you’re the type who likes to read into the symbolism.) The infamous invisible jet, on the other hand? Follow the lead of recent comics, and just let Wonder Woman fly on her own. Give Her Pants
Honestly, the fact that the most beloved superheroine of all time is still parading around in a leotard is beyond embarrassing. (Her outfit got even skimpier over the years, as she originally wore a star-spangled skirt.) Wonder Woman is a warrior, and should wear an outfit befitting her status. (She needs a breastplate that isn’t just a cleavage-conveyance system.) A recent fan contest produced some excellent costume redesigns for the character, updating a look that has remained in stasis for far too long. Wonder Woman doesn’t have to wear a powersuit, but please let her put on some pants.  Or at least a pair of leggings.  When not writing, Nick Nadel is in line at the comic book store alongside the other geeks, er, fans of speculative fiction. His most prized possession is a 1960s Batman comic wherein the Dynamic Duo are trapped inside a fortune cookie factory. He lives in Brooklyn and updates his aptly named website (nicknadel.com) with comedy writing and videos. Read More
Share