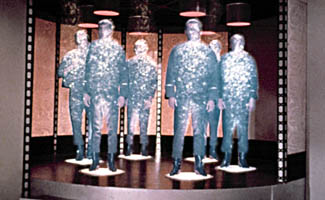 In this tough economy, you might be asking yourself, “Should I keep saving for a teleportation machine or give up and pay down my credit card debt?” You know what Suze Orman would say about splurging on a transporter (denied) but what about science? If there’s a chance you can beam yourself up sometime soon, you want to be ready.

“Exact teleportation was thought to be impossible,” Charles H. Bennett of IBM Research told CNN. “Now, however, it is known to be possible.” He’s part of the team that first discovered a method called “quantum teleportation.” It’s rudimentary, but it works.

The method relies on what scientists call quantum entanglement;
Einstein described as “spooky action at a distance.” The idea is that
two particles can be made to behave as if they are the same, even if
they are separated by large distances. In Discover Magazine, TV personality and Theoretical Physicist Dr. Michio Kaku explains it this way:

Suppose
we wish to teleport information from atom A to atom C. We begin by
having a third atom, B, that starts out entangled with C. Now atom A
comes in contact with atom B, so that the information content of atom A
is transferred to atom B. Because B and C were originally entangled,
A’s information has now been transferred to atom C; someone examining
atom C would be unable to tell any difference between it and the
original atom A.

It’s really more like telecloning. (Could this be why, in the original Star Trek
series, the transporter malfunctioned and beamed up two copies of
Captain Kirk?) Not surprisingly, the question everyone asks is, “What
happens to the person once his information is copied?” Entanglement
destroys the original, so you won’t end up with two versions of the
person at the same time. “Anyone being teleported in this way would die in the process,” says Dr. Kaku. “But the information content of his body would instantly appear somewhere else.”

How
long before you can “die” at home to appear at the office? “We have
teleported particles of light 600 meters across the Danube river,” says
Dr. Kaku. “The world record is 100 miles from one Canary Island to
another.” Next, he says, scientists are going to teleport from the
Earth to outer space and after 2020 — they’re going to teleport to the moon. But specifies Kaku,
“This is not Captain Kirk. We are teleporting individual particles.”
Within a decade they expect to transfer water molecules and within two
decades he says they’ll transfer DNA, genes, viruses and maybe a cell.
But since a human consists of around 15 trillion cells that will take
longer. “We’ll have to wait a few centuries before we can teleport a
dog or a cat or Captain Kirk,” he says, “but the proof of principle has
been demonstrated.”

In short, you won’t be teleporting, but your great-grandchildren might. Here’s what you can do: Look at io9’s list of “The Sickest Teleportation Accidents In The Universe”
to make yourself feel better or spend just $19.99 on a full size
replica Star Trek Classic Communicator from thinkgeek.com and pretend.
It has over 20 sound effects and phrases, including “Scotty here,
Captain.” and “Transporter room ready to beam up.”