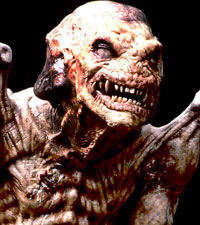 In the late eighties and early nineties, it seemed required by law that one copy of Pumpkinhead be displayed in every video store in America. Thousands of kids probably remember seeing the dubious-looking monster on the cover and skipping over it to pick up something that promised a bit more nudity or gore.

The initial installment, from 1988, starred Lance Henriksen, best known for his roles in dozens of really bad movies ( Scream 3 , AVP: Alien vs. Predator, Super Mario Bros. ) and a cancelled TV series (Millennium). The sequel, Blood Wings, was a movie with a director (Jeff Burr) who specialized in films with a number after them: Stepfather 2 , Texas Chainsaw Massacre 3, Puppetmaster 4. Ten years later, there were two more Pumpkinheads, which premiered on the SciFi Channel. But none matched the original.

Directed by Stan Winston — a special-effects legend who worked on Predator, Small Soldiers , The Thing , and Iron Man — the movie is dark, bloody, and beautiful, shot in slabs of reds and blues that create a palpable sense of dread. It begins with Lance (as a baby) watching out his cabin window as a giant demon guts his next-door neighbor. Flash forward, and he’s a shirtless, flame-thrower-wielding hillbilly hunk, raising a boy all by his lonesome up in the hills.

Into the setting comes a gang of city slickers. It’s not long before one of them runs over Lance’s boy with his motorbike (“He came out of nowhere!”). Lance is so upset that he finds a freelance witch to raise a spirit of vengeance. Enter Pumpkinhead.

The teens run as fast as their Vans can carry them, and their little legs kick and thrash in their stonewashed jeans as Pumpkinhead hoists them up by the skull, pops them open with his chainsaw-size claws, and bashes their brains out on old-growth oaks. The witch’s servant comes at a price (“You thought this would be easy?” she cackles), and, by the end, Lance has to pick up his shotgun and blow the thing back to hell.

Winston’s gorgeous, stylized compositions made his backcountry setting look like the favored vacation destination for the Brothers Grimm. He died this past June, but Pumpkinhead remains a tribute to his talent.

You can watch the full-length movie through November 1st on www.amc.com.