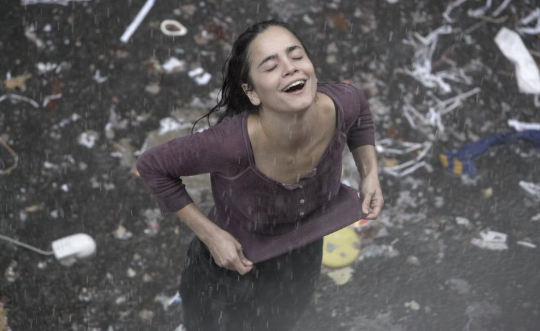 The ad campaign for Blindness consists of posters sporting the taglines “Love is blind,” “Faith is blind,” and “Hope is blind.” Would that moviegoers were themselves given blindfolds before this two-hour dud. The better to avoid watching Julianne Moore step in human feces, and an unshaven Gael García Bernal and an “evil” Jew steal money and rape women, and an endless parade of blind people running into door frames and walls and falling down stairs like they’re on a particularly cruel episode of The Three Stooges. Earplugs might help, too — so as to block out Danny Glover’s Legend of Bagger Vance line readings.

Blindness is rife with clichés. A mystical, blind black man? A rainstorm that brings the action to a halt as the characters, faces upturned and arms outstretched, have their sins washed away in the gutter? A painfully contrived, faux-Renaissance scene in which a group of women bathe a corpse while lit by shafts of mystical light?

Oh, dear. If you’re looking for a contender for worst movie of the year, add this one to your list.

One expects more from Fernando Meirelles, who directed the superior City of God . His previous film, The Constant Gardener ,
was based on a weak John le Carré novel, but he managed to turn it into
a highbrow thriller, a slick entertainment that was also the subject of
a piece in The New York Times Magazine. Working with the novel Blindness
(by Nobel Prize winner José Saramago), one might think he’d pull in the
other direction, taking his literary source in a more populist
direction. Instead, he’s produced a turgid film that even the tiniest
pinprick of common sense sends flapping into oblivion.

Blindness tells the story of upper-middle-class people who live in homes furnished by objects that look as if they’ve been purchased at Design Within Reach and Terence Conran.
When society is hit by a plague of blindness, they are corralled into
abandoned hospitals and prisons and left to fend for themselves.
Sightless — and without access to decent home goods — they have no
reason to live. They throw their trash everywhere, poop on floors, and
have a lot of inappropriate sex. Julianne Moore — whose husband (Mark
Ruffalo) is an eye doctor (wow) — is the sole person who hasn’t lost
her sight. Eventually, the blind people bust out, and, once they’ve
return to their attractive, well-decorated homes, they’re cured.

Blindness the novel took an excessively cynical view of human
nature, but it was redeemed by Saramango’s beautiful writing. Movies
can’t wallpaper over their sins with gorgeous cinematography. While
this one looks pretty, it lacks all sense and logic. (Couldn’t Moore
spend a little time trying to fix things?)

But to engage with Meirelles’s film on a literal level is to be
flummoxed. The blind here can’t find a toilet or perform basic first
aid, but they can organize an extortion racket and a series of
merciless gang rapes. The director wants to talk about the Human Soul
— and does so with all the subtlety of a 15-year-old’s poetic
scribblings.