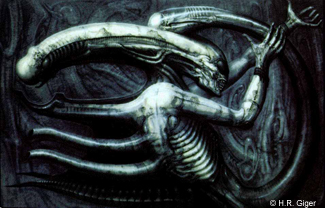 In all of science fiction, no creature has been feared as much as the “foul tongue from Acheron.” It preys on primal fears, as a killer and because everything about it — from the phallic curve of its black head as an adult to the sucking of its pupal facehuggers — is unwholesomely carnal. Which, of course, is just what it’s creators, director Ridley Scott and Swiss nightmarist H.R. Giger, had always intended: A monster that comes slithering from the subconscious.

The Xenomorph (which means “alien form” in Greek) is not how most refer to Giger and Scott’s monster. Usually, it takes its name from the movie in which it first appeared: 1979’s Alien. But “alien” is so maddeningly imprecise, a vague genus shared by thousands of fictional extra-terrestrials, from E.T. to Marvin the Martian. The Xenomorph is one of a kind: An eyeless, acid-blooded insect, which reproduces by violently implanting its eggs into a foreign host to incubate before violently ripping through their chests.

What would eventually become the design for the xenomorph was H.R. Giger’s 1976 painting Necronomicon IV. Alien
screenwriter Dan O’Bannon — looking around for a monster design that
would be appropriate for a film he saw as being primarily about “alien
interspecies rape” — saw the painting and brought Giger on-board to
transform his surreal vision into a working costume. Giger —
idiosyncratic, to say the least — decided to make the creature
biomechnical, using parts from an old Rolls Royce and discarded animal
bones.

Within the universe of the Aliens films, the Xenomorph is
first discovered when the interstellar mining ship U.S.S. Nostromo is
alerted to a strange distress call from the planet LV-426. Down on the
surface of the planet, the Nostromo’s crew discover a massive,
biomechanical alien ship filled with xenomorph eggs and piloted by a
long dead “space jockey”: A colossal alien with an elephant-like trunk
and a suggestive hole in its rib cage. Director Ridley Scott suggests
that the “space jockey” was actually a member of a warlike alien
species that developed the Xenomorph as a weapon… perhaps the only
hints of origin we’ll ever have about the species.

Whatever the case, the Xenomorph life cycle, as described in the
first movie, is not complete. The initial film follows the Xenomorph
from a face-hugging egg to its chest-bursting and quick growth into
adulthood, but it never suggests where the eggs come from… although a
deleted scene from Alien suggests that the Xenomorph traps
its victims in cocoons and transforms them into eggs. It was only in
James Cameron’s 1986 sequel, Aliens,
that the xenomorph lifecycle was fully fleshed out. Inspired by Giger’s
insect-like design, Cameron concluded that the xenomorphs must be a
hive species, and created the Xenomorph Queen. It differs from the
xenomorph “warriors” with its 15-foot-height, elaborate brain case and
immense, egg-laying ovipositor, which it can tear itself free from
during moments of crisis. The most recent Alien film, Alien vs. Predator: Requiem, also suggests that the Alien Queen can implant facehuggers directly into a host using its mouth.

One of the most Xenomorph’s most interesting characteristics is how
it takes on the physical characteristics of the host in which it is
implanted. In the first two Alien films, the Xenomorph’s
characteristics are decidedly human (having just as much to do with the
fact that the aliens were played by human actors in costume as anything
else). But in Alien 3, the xenomorph is hosted by a dog: The result is a faster, quadrupedal xenomorph that is decidedly more canine. The Aliens versus Predator
series of films have taken this concept and run with it, prominently
featuring every scifi fanboy’s dream crossbreed: the Predalien.

What may be the most fascinating trait of the Xenomorph, though, is
how a monster designed as a violent, extra-terrestrial rapist has
managed to facehug the cultural mainstream. Aliens, as a
franchise, includes a large array of comic books and video games.
Superman, Batman and the Green Lantern have all fought xenomorphs in
the expanded Aliens universe. There’s even a huge line of Alien toys… utterly bizarre, given the fact that only one of the six Alien
films has been rated anything less than an ‘R’. The Xenomorph, despite
its unsavory special instincts, hasn’t so much captured America’s heart
as burst through its chest. And we wouldn’t have it any other way.