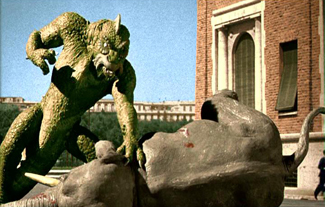 The implausibility of life on Venus can’t stop the imagination. The
planet’s relative closeness, its lurid astronomic beauty and its
bizarre environmental conditions make it perfect fodder for both the creative and the mad.

It was Tarzan creator Edgar Rice Burroughs who first popularized the Venusian in science fiction. Scrambling for a pulp series as successful as his John Carter on Mars novels, Burroughs dreamed up a similar story set on Venus, which the local Venusians calls “Amtor,” following the adventures of another displaced Earthling, Caron Napier. Far removed from astronomic reality, Burrough’s Venus is a verdant, water-covered world, populated by human-like inhabitants. The races of Venusians on Amtor are diverse: The exiled Vepajans, the dirty pinko Thorists, the eugenicists of Havatoo, the hideous Cloud people and the slavering zombies of Kormor.

Once the kindle had been sparked, other authors started examining the indigenous life of Venus. Most agreed the savage environment of the planet would generate an equally savage for of life. In Charles R. Tenner’s Tumithak of the Corridors, portrays Venusians as a hideous race of spider-like aliens called the Sheiks, who invade Earth and drive the remaining human population into underground catacombs.

H.P. Lovecraft also thought Venus had potential: In his short story, Diary of Alonzo Typer,
Lovecraft thought Venus an appropriate homeworld for some of his Elder
Gods and Creatures from Beyond Space. The “Lords of Venus” are darkly
mentioned numerous times, and it is hinted that the insidious Serpent
People come from there. Venus is a very real part of the Cthulhu Mythos.

Of course, not all have agreed that the Venusians are inherently savage. C.S. Lewis’ classic Perelandra
depicts Venus as a water-filled planet, a kind of Eden lorded over by
an emerald-skinned King and Queen. Roald Dahl also thought Venusians
were aces. In Charlie and the Great Glass Elevator,
surrealist chocolatier Willy Wonka wryly observes that planet used to
be the home of an alien race of Venusians. Unfortunately, they were
gobbled up by another native: The infamous vermicious knids.

In film, there are fewer Venusians, but they are noteworthy: In 1956’s It Conquered the World,
the titular world-conquering “it” was a giant triangular crab monster
from Venus. Gifted with mind control, the creature beams its voice
across space on radio waves to promise peace on Earth by the
elimination of human emotions. Of course, the creature’s actual aims
are far more insidious: It intends to subjugate the human race. It was
remade in 1966 as Zontar, the Thing from Venus.

It Conquered The World was followed the next year by a scifi masterpiece: Ray Harryhausen’s genius 20 Million Miles to Earth.
The film depicts the crash landing of a spaceship in Sicily returning
from Venus with a sample of the local faunae: A horrific reptiloid with
gorilla like intelligence, which quickly goes on the rampage. It was
followed the next year by another scifi movie about Venusians, Queens of Outer Space, in which is confirmed what we have all always suspected: Zsa Zsa Gabor is not of this Earth.

But what of the reality? Are there real Venusians? Ixnay. The
atmosphere is comprised mostly of sulfuric acid, which would do nothing
for the complexion of Zsa Zsa’s species. Never the less, plucky
Ufoologist often insist upon the reality of life on Venus. Many of the
1950’s supposed alien contactees insist that Venusians are benevolent
and trans-dimensional, existing on an “etheric plane” that vibrates
past our physical plane. They can come to see us in space ships that
slow their inherent vibration down to the point of popping into our
reality. This view of Venusians inspired a whole religion: Benjamin
Creme’s New Age Theosophy, in which Earthy’s deity, Sanat Kumara, is
actually a Venusian. C.S. Lewis would approve.

In scifi then, Venus is — if not a fine place to visit — than at least an interesting one. Just beware the vermicious knids!