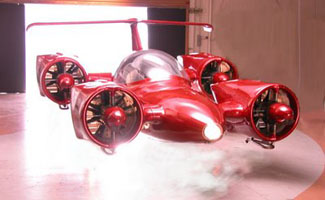 Just stop it, USA Today. You and your article “Inventors are sure cars can fly.” Haven’t Scifi fans been tortured enough? Before you were even a newspaper, cars were supposed to fly and you know what? It’s been one disappointing auto show after another.

Seriously, dare we let ourselves hope? According to the piece, “a new crop of magnificent men and women believe advanced materials and sounder business practices finally will allow their flying machines to defy skeptics.”

Let’s be clear about what these inventors are actually trying
to accomplish. Perhaps it’s an attempt to lower expectations, but they
don’t use the term “flying car.” They prefer to call their vehicles
“roadable aircraft.” (If they are trying to lower expectations, it’s
working.) What this really means is that if you’re looking for a plane
that fits in your garage, progress is definitely being made. If you
want what the Jetsons had, keep dreaming.

Take the Terrafugia Transition.
At a projected price of $194,000, the Transition “is not a replacement
for a Honda,” says the company CEO, Carl Dietrich. It’s meant to
provide “a fundamental new freedom that has never existed in one
package.” With it you can: Drive to your local airport, fly up to
400nm, land, convert, and drive directly to your destination. All
without leaving your seat. More than 50 have already been ordered, the
first flight is planned by the end of the year, and he hopes deliveries
can begin in 2010.

USA Today also mentions the much cooler looking LaBiche Aerospace FSC-1, which stands for “Flying Sports Car #1.”
The name sounds great but don’t get your hopes up. You have to put it
together yourself and “deliveries of production units are scheduled to
begin sometime in the near future.” How many times have you heard that?

Then there’s Moller International. The good news is that company President Paul Moller hasn’t given up on building a true flying car. The bad news, he has yet to make one. This inventor told USA Today
in 1994, “that he would be mass producing his M400 Skycar (pictured
here) by 2000 and selling it for as little as $30,000.” Since that
never happened, should we believe his company now when they say they’ll
start delivery of the M200 in 2010 at $250,000 each?

The irony
is that when — or if — they do finally release the M200, their
Jetsons inspired saucer vehicle, scifi fans may no longer be
interested. By that time science fiction will surely have introduced
another mode of transportation that goes way beyond even the
spinners in Blade Runner. People won’t be asking, “Where is my flying car.” They’ll be saying, “Why did I ever want one?”