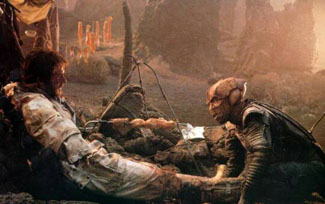 In space, where infinite possibilities exist out in the inky vastness, one theme rears its ugly head time and time again: Everyone has it in for the humans.

Of course, given enough time and the right circumstances, some intergalactic species can overcome their bigotry — some will even psuedo-sire offspring with Earthlings. But then, the aliens that assent to peaceful co-existence are rarely any real cause for concern, lacking the killer instinct (and abilities rendering them nigh invulnerable) that the real threats possess.

Just look at the Dracs in Enemy Mine. It’s a race populated by murderous malcontents — up until you set
the mood and send in Dennis Quaid, that is. (Oh sure, some say the Dracs
reproduce asexually, but I think we all know what really happened that
multi-moonlit night.) How scary a threat can they be if all it takes is a Quaid brother to undo their hatred?

But on the opposite end of the alien spectrum are the Necromorphs, the alien antagonists of EA’s forthcoming game Deadspace. Now that’s a species unwavering in their quest to kill.
Granted, they’re aided in their murderous rampages by unpredictable gravitational states and the ability to
regrow limbs as they’re dismembered. But even so, unlike the Dracs, there’s no room for
Barry White and gurgling sweet nothings into the ears of helpless
humans in a Necromorph’s busy schedule. For these true monsters of the
void, it’s all blood-soaked business.

Watch man meet Drac. For a full schedule of Enemy Mine on AMC, click here.