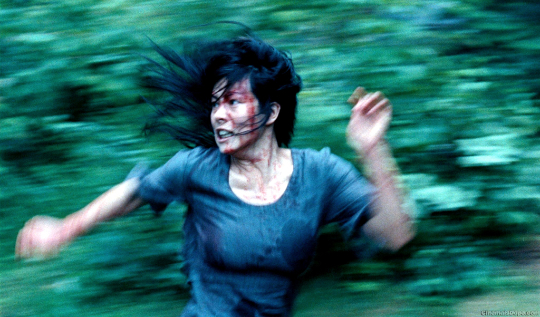 The disemboweling of the American horror biz, the glut and bust of the Asian horror industries and the rise of the Euro-Horror machine was the big story written between the lines at this year’s Toronto International Film Festival. America has dominated horror movies for a long time, but the Asian invasion sparked by the release of Japan’s The Ring in 1998 wrested the crown away from us. We could have gotten it back — after all, we reached the moon first — but we were lazy and complacent, and so Hollywood churned out PG-13 mainstream multiplex horror and remakes of older, better horror movies. But over in Europe, directors were pushing boundaries, and what’s happened now is that they’re better at horror movies than we are.

Trying to come up with a list of horror movies that will be remembered in 20 years, I can’t think of a single American horror movie from 2007 or 2008 that’s a contender. The Mist ? Rob Zombie’s Halloween? 1408 ? But check out this list of foreign possibilities: Inside (France), Vinyan (Belgium/France), Rec (Spain), The Orphanage (Spain), Martyrs (France). Let the accounting go back a few years and it gets even worse: Severance (UK), Pan’s Labyrinth (Spain), Shaun of the Dead (UK), 28 Days Later (UK), Haute Tension (France), Calvaire (Belgium), Nightwatch (Russia) and The Descent (UK). And with a fall schedule heavy with upcoming films like Let the Right One In (Sweden), Dark Floors (Finland), Trackman (Russia) and Dead Set (UK) there is only one thing to say: America, we eat shame cake.

The Burrowers and Deadgirl
The two highest profiled American horror movies at TIFF this year were JT Petty’s cowboys and monsters mash-up, The Burrowers, and River’s Edge -meets–Zombie-Strippers flick Deadgirl.
Both movies are pretty good, but in the face of the Euro onslaught,
they seemed like timid rethinks of ideas that have been done before. JT
Petty’s Burrowers is a moody, dread-heavy flick that injects monsters into John Ford’s classic film The Searchers.
It does open up to make a point about genocide towards the end, but
it’s surprisingly light on atrocity, eye-bulging insanity and
queasiness. Deadgirl sounds new — disaffected teenagers find a
zombie girl in a basement and turn her into their undead sex slave —
but the directors seem more interested in making a coming of age movie
(and maybe a Hollywood calling card), so we wind up with a film that
feels one part After School Special and one part horror film, a hybrid
that doesn’t do justice to either genre.

Martyrs
While
both movies may be perfectly geared towards the marketplace, both
seemed to feel they needed to inject other genres and other genre
concerns to justify their existence. Martyrs,
on the other hand, felt like the future. This French flick kicks off
with a young girl escaping from the captors who’ve locked her away for
years, torturing and abusing her. Flash forward a decade or so and she
finds the married couple who kidnapped her, now happily living in the
suburbs, and dispatches them (and their children) with a shotgun. This
is the first 20 minutes of the movie and what follows will alternately
bore, disgust, horrify, confuse and thrill you. It’s not a perfect
movie — it’s not even a movie that I liked all that much –but there’s no
denying that it’s the kind of philosophical horror flick that’ll stick
with you for days… the same way that the vomit from the viewer who
fled the Midnight Madness screening of this film stuck to the floor and
walls of the lobby.

Vinyan
Vinyan, a loose and uncredited remake of the Spanish horror film, Who Can Kill a Child? (1976), was received with great acclaim, and Canadian horror film, Pontypool, about a country infected with a language virus sounds like the exploitation version of Blindness,
only with far better reviews. One thing that’s differentiating these
Euro-horror films from their American counterparts is that they revel
in what horror filmmakers have traditionally thought they needed to shy
away from. Vinyan is the ultimate tasteless concept: 2004 Asian
tsunami + international adoption + white post-colonial guilt = the
foundations of a rancid palace of sleaze. Martyrs is built
around gut-churning violence against women and shows the kind of gore
that would send most studio executives running from the screening room.
There isn’t a concession to be had in either movie: Everything is
cranked up for maximum atrocity. Sometimes less is more, but after a
while, our American coyness about gore, especially in a movie
predicated on gore, begins to feel like a concession rather than a
vision.

Horror is in a bind these days; “That was pretty good,”
doesn’t cut it anymore. To get noticed, you need to be outrageous,
insane and completely over the line. The concepts need to be high, the
set pieces need to be excruciating and the actors, apparently, need to
speak French. Or Russian. Or Canadian. We may do the big Hollywood
blockbuster better than just about anyone else, but horror? Like the
Roman Empire, our time has passed. We played our PG-13 fiddle while
horror burned and now the barbarians are at the gate. And they drive
Vespas.