Regardless of our relationship with mom, at one point we all wish she was a little bit cooler, whether it’s defending us from aliens or engaging in elaborate drug smuggling schemes. At least we can live vicariously through these 15 cinematic matrons.

15. Sarah Pierce (Kate Winslet), Little Children
Through a bad marriage and an intense love affair with a neighborhood hottie (Patrick Wilson), she tends to her child throughout, pushing the stroller, providing quality time at the playground, never relinquishing or compromising her motherhood duties even when the new relationship reaches the boiling point. And besides, Winslet exhibits a depth of acting in this film that puts her up there with the best of them. JB 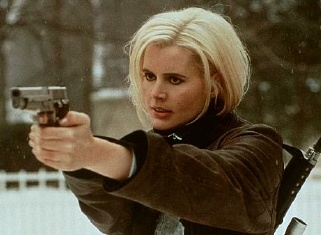 14. Samantha Cain/Charli Baltimore (Geena Davis), The Long Kiss Goodnight
Davis goes from being a sweet stereotypical school teacher to gradually resurrecting the killer instincts of a trained assassin. It’s the only movie in memory where a woman gets to be an amazing mother and be an action hero at the same time, without having to destroy any of her personality to fulfill either role. RG

13. Mrs. Parker (Melinda Dillon), A Christmas Story
Like many great movie mothers, Ralphie’s mom is happy to let dad (Darren McGavin) think he’s king of his castle while she’s the true power behind the throne, most notably when she ‘accidentally’ breaks his appalling leg lamp and laughs behind his back as he struggles in vain to repair it. She’s tough enough to wash Ralphie’s mouth out with soap, yet cool enough to keep his secret when he gets in a fight, and only she can get little Randy to eat a plateful of meat loaf and potatoes by encouraging him to show her ‘how the little piggies eat.’ My mom made me use a fork. DW 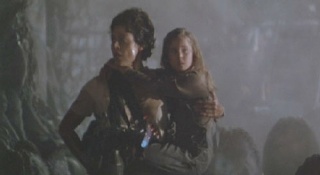 12. Lt. Ellen Ripley (Sigourney Weaver), Aliens
It’s true, Ripley was not a mother, but that doesn’t mean she never wanted to be one. It’s just that her schedule of fighting aliens and floating in space during cryo-sleep for upward of 50 years never allowed her the child rearing time. But that all changes when she meets Newt (Carrie Henn). Telling Newt bedtime stories, reassuring her that she’s safe from the real monsters, and fighting off a queen alien with an exosuit cargo loader is all in a parental day’s work for Ripley — proving that not only is she a mother figure, but a bad mother fucker figure. Name another mom that can dual-wield a pulse rifle and flame thrower. JM

11. Annie Sullivan (Amy Madigan), Field of Dreams
Of course, she endorses her husband’s vision to build a baseball field on their struggling farm, and thus providing my ultimate childhood dream. But Annie’s defining moment comes during a town meeting on banning books in school. She beautifully defends the literature of the 1960s, before positively dismantling a taunting, censorship-loving nemesis. ‘I experienced the sixties,’ the nemesis responds. ‘No, I think you had two fifties and moved right into the seventies,’ Annie counters. Eventually, Annie calls this poor, overmatched woman a ‘Nazi cow’ and asks her to ‘take it outside.’ Possibly the most underrated movie mom ever. PC

10. Hazel Aiken (Caroll Baker), Andy Warhol’s Bad
The question is: Is Baker’s Hazel Aiken cool or dead cold? Hazel is a suburban homemaker from Queens who performs electrolysis from her home as she tends to her husband, a mother-in-law, and an irritating daughter-in-law with an autistic child. She also runs a Murder Inc. setup from her kitchen where she provides women assassins for clients who want to have their crying infants and nasty pets eliminated. Sometimes her rates are too high. One mother decides to throw her kid out the window rather than pay the fee. When the child hits the pavement, another nasty mom, passing by, tells her son, ‘That will happen to you if you don’t shut up!’ It’s a film and a mom that truly capture the heartbeat (or lack thereof) of ’70s New York. PB

9. Rose Darko (Mary McDonnell), Donnie Darko
Donnie Darko (Jake Gyllenhaal) may be sleepwalking and hallucinating his way through suburban purgatory, but at least he’s got a sensible, caring, anti-censorship mother. Mrs. Darko reveals even more stealth coolness when her reluctance to chaperone her little daughter’s dance trip inspires a fellow dance-parent to ‘doubt [her] commitment to SparkleMotion.’ In Richard Kelly’s doom-y world, a higher compliment could not be paid. JH 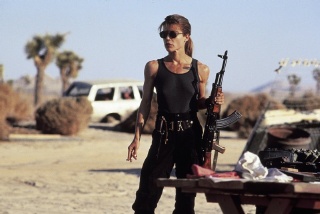 8. Sarah Connor (Linda Hamilton), Terminator 2: Judgment Day
If you think postpartum depression is rough, try watching the father of your child killed by a sentient machine from the future that is also hell-bent on destroying you. Knowing that your son is mankind’s future hope can put a lot of stress on a mother, so it’s no wonder that Terminator 2‘s Sarah Connor ended up in a mental ward. But before being committed she was able to pass along pearls of wisdom to her son John — like how to trick an ATM machine into spitting out easy money, and important metaphysical lessons like ‘No fate, but what we make.’ Throw in a kick-ass arsenal, militia connections, and the balls (and biceps) to fight off a T-1000, and you have a mom that you don’t talk back to. JM

7. Mrs. Gump (Sally Field), Forrest Gump
Forrest may have had the IQ of a flat tire, but this plucky single mother did everything she could — from running a boarding house to sleeping with Forrest’s elementary school principal — to make sure her son got the same opportunities as his peers. Plus, she was a hell of a mom. Who else can claim that their son was an All-American football star, war hero, ping-pong champion, cross-country running Christ figure, and filthy rich entrepreneur? My mom doesn’t count. PC

6. Helena Ayala (Catherine Zeta-Jones), Traffic
Zeta-Jones undergoes a sweeping transformation in Steven Soderbergh’s 2000 drug polemic as a pregnant wife whose husband (Steven Bauer) is brought up on smuggling charges. From unassuming housewife to ruthless queenpin ordering hits and devising clever smuggling schemes, this mother-to-be will do anything, preferably illegal, to protect her unborn child. And her millions of dollars in drug loot. DT 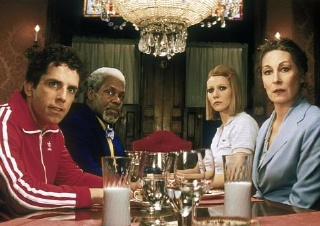 5. Etheline Tenenbaum (Anjelica Huston), The Royal Tenenbaums
During much of the Royal Tenenbaums, the Tenenbaum children live in their own hermetically sealed worlds; it’s Etheline who acts as a bridge to rest of the universe, and, more importantly, to each other. Soft-spoken bu
t firm, sweet but not smothering, she’s always available for advice about smoking (against) or keeping an electrical gadget too close to the tub (also against). She also, we see in flashbacks, organized her children’s vast network of prodigious hobbies, even letting them write their own checks. JH

4. Diane Freeling (JoBeth Williams), Poltergeist
What’d your mom ever do for you? Cut the crust off your sandwiches? Get you a Band-Aid when you scraped your knee? Amateur! Williams rocked the house — literally — as Diane Freeling, mother of the precocious Carol Anne (the late Heather O’Rourke), who was abducted by poltergeists living in their tract home and sucked into the ether. To get her back, mom had to toss herself into the beyond (the portal to which was located in the kids’ closet), and forcibly remove Carol Anne from the other world. Sure, I love my kids, but I draw the line at tangling with ghosts. CN

3. Elastigirl/Helen Parr (Holly Hunter), The Incredibles
How many movie moms can turn themselves into a parachute? Helen Parr is far more than the mother of three superpowered siblings, she’s a kick-ass superhero in her own right, catching criminals long before, and on the very day of, her marriage to Mr. Incredible. DT

2. Laura (Belén Rueda), The Orphanage
Laura was brave enough to adopt a child with HIV, and when he goes missing one day in the creepy old orphanage (where Laura grew up), she stops at nothing to try to find him. Ultimately that means losing her husband, rearranging the house to the way it was 30 years earlier, and summoning the ghosts who live there to help with the search. My mom wouldn’t even play a game of Red Rover with me and my friends, much less the undead. CN 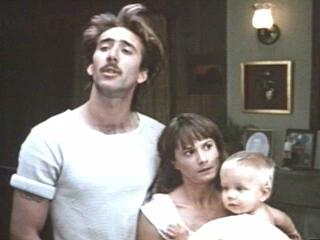 1. Edwina ‘Ed’ McDunnough (Holly Hunter), Raising Arizona
Holly Hunter makes a second appearance on this list with perhaps the toughest mom of all. Unable to bear children herself, she does the sensible thing by stealing one from a family that’s ‘got more than they can handle.’ Though her matronly instincts are perhaps a bit too strong, when it comes time to defend her ill-gotten child from a ruthless bounty hunter (Randall ‘Tex’ Cobb), she wastes no time with pleasantries: ‘Give me that baby, you warthog from hell!’ DT