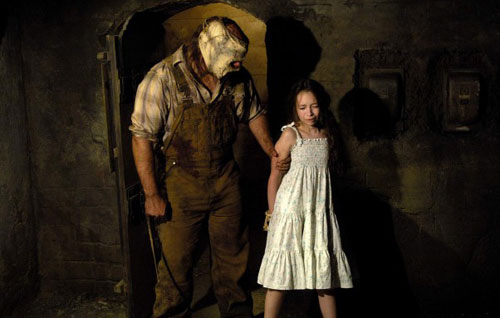 Seed is the best Uwe Boll movie ever made. That’s a sentence that qualifies itself, because while it does contain the word “best,” it also contains the name “Uwe Boll” — thus obliterating its positive qualities like a neutron bomb. Released straight to video, Seed continues to grope desperately in search cinematic success in a world that has largely rejected Boll’s video game adaptations like Bloodrayne and House of the Dead. First he tried comedy with the unfunny Postal, and now he has decided that what the world really needed was his take on torture porn. And so, Boll sat down and squirted out Seed, a grubby, vile bit of nonsense that reads like what you’d find in the poetry journal of a 16-year-old school shooter.

Set in the ’70s, Max Seed (Will Sanderson) is a serial killer who has murdered 666 people in six years (Oh, symbolism!). He was finally brought down by a hard-drinking cop, Matt Bishop (Michael Pare), who finds that arresting Seed has shaken his faith in humanity and all the nice things in life, like puppies and kittens. Seed is to be executed, but the electric chair needs an upgrade and so, unable to kill him, the warden has him buried alive. Bad idea: Seed crawls out of the grave and kills everyone who sent him to prison, plus some other people for good measure.

Oddly enough, most of the cast are returning Uwe Boll victims, and
so is Mathias Neumann, the cinematographer. He was Boll’s DP on House of the Dead but the guy has improved by leaps and bounds since, and Seed
is gorgeously shot. Full of low light compositions and a sharp use of
practical lighting (using light sources present on the set like the
headlights of cars, table lamps and flashlights), Seed looks
great. And it features some intense gore, including a long, one-take
scene of a woman having her head turned into an oozing stump by 250
blows from a hammer.

Unfortunately, this is an Uwe Boll movie and the second his actors
open their mouths to utter their inane lines, the creepy mood goes
right out the window. The fact that Max Seed himself looks and acts
like an out-of-shape professional wrestler who’s been sleeping in a
ditch for three weeks takes away from him menace, more than a little
bit. Throw in plot holes the size of the Grand Canyon and lapses in
logic one wouldn’t expect even from a five-year-old breathlessly
telling a story about their day at school, and you wind up with yet
another Boll dud. But this movie also ticked me off, and I’m angry that
an Uwe Boll movie generated an emotion in me beyond a bored yawn.

Seed opens with this title card:

“WARNING: This movie contains graphic and disturbing footage of real
events. We have incorporated this footage into the content of the film
to make a statement about humanity. For more information of the actual
events depicted in the footage, please visit peta.org. – everyone
should protest this.”

This is followed by five minutes of actual footage of animals being
beaten to death and tortured in gruesome detail, and if that doesn’t
make you gag, then the stink of sanctimony wafting off this film
certainly will. Boll thinks his film is going to outrage and shock, and
in a way it does, but there is no message about human nature, no
questions asked about man’s inhumanity to man. The only question this
poses is: Is there no depth to which PETA won’t stoop, no sleazebag
they won’t get in bed with to get publicity for their holy mission?

Early in the movie, one character turns to another and says, “He
must be trying to tell us something.” The other shakes his head, “It
doesn’t make any sense.” Exactly.

Grady Hendrix is one of the founders and programmers of the New York Asian Film Festival. He writes about Asian film for Variety at Kaiju Shakedown and should have found something better to do with his life by now