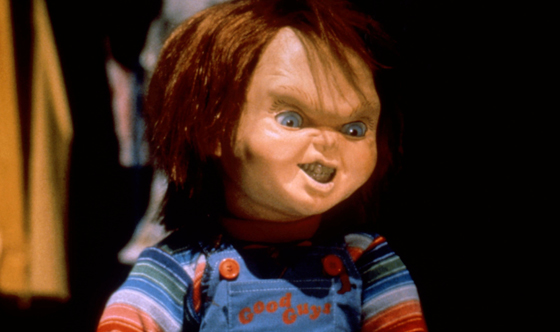 Leave it to People Magazine to track down the child stars of yesteryear in yet another “where are they now” piece. And once again, they miss what is arguably the greatest child star in the history of horror film. No, not Drew Barrymore — we’re talking about Chucky. Horror’s little baby boy is all grown up. How grown? Well, Chucky was born in November 1988. That’s when Chuckster popped up in the heyday of slasher-pic history. With Freddy, Jason, Michael and Pinhead all tearing up the sequel track, it was time for a new face, a fresh face — the plastic face of Charles Lee Ray. Sadly, like many child stars, Chucky saw little of the money earned by this franchise. Young, impressionable, and gullible, Chucky let the industry chew him up, spit him out, and even melt him. The experience left him bitter and disillusioned. How’d that happen?

Child’s Play (1988)
The story of Chucky’s rocket rise to fame started with this classic fright flick. A young actor from Kansas, Chucky knew little of the shark-infested-waters known as Hollywood. The movie called for a sinister plastic face, and Chucky fit the bill. He received no royalties, no residuals, no points and, in fact, was mostly paid in toys. “How the hell was I supposed to know that wasn’t industry standard?” Chucky says. “I was on my first movie  — if you had more Barbie action than the Toys-R-Us best-seller, you’d think you were pretty big stuff, too.”

Chucky refers, of course, to the well-known assembly-line fight scene from Child’s Play II that was, shall we say, an influencing factor on a similar scene from Star Wars: Episode II – Attack of the Clones. After Clones, Chucky successfully sued Lucas for “idea thievin’,” to the tune of $550 trillion, but unfortunately, U.S. courts refuse to recognize a verdict handed down by the Wham-O My First Lawsuit™ boardgame (which Chucky received as partial payment for his work on the original Child’s Play). That amount is also more money than the United States has in circulation, which leads us back to the theory that Chucky is just plain stupid.

Child’s Play III (1991)
Now you can’t blame this one on Chucky. Here’s the plot: The makers of the Good Guys™ doll line decide to re-release the product because publicity had died down and there was a buck to be made. They re-make the doll, some of the parts of the original doll get mixed in, and aw shucks, we’re got a killing spree on our fat little plastic hands. If the plot of Child’s Play III sounds familiar, that’s because it’s exactly the same plot from Child’s Play II. Exactly. The same. Plot.

Bride of Chucky (1998)
“I got ripped off here, too,” Chucky says. “My lovemaking scene with Jennifer Tilly was a movie first — two dolls getting it on with steamy full frontal.” Then the creators of South Park released a 2004 flick called Team America , which had a, ahem, similar approach.

The Money
Chucky made nothing for his work. Nothing but toys. Eventually, the Barbies left him. Hollywood abandoned him. He was penniless and doing the flop-house thing with some Cabbage Patch Kids in the used-toy bin of a local Salvation Army shop. And then one day in 2002, almost like an act of God, John Gruden coached the Tampa Bay Buccaneers to a Super Bowl championship. Gruden’s likeness was locked up by the NFL, yet there was a huge demand for Chinese knock-off bobblehead dolls. Chucky was in demand once again.

“The Chinese needed a face model for these Gruden toys,” Chucky said. “I was the guy. And this time, I asked to be paid in cold hard cash. American cash, thank you very much.”

Where Is He Now?
Being the mainstay of horror that he is, this blog tracked down Chucky back in July for a little piece we called “Patriotic Monster Americans.”
In that piece, we wrote that “Chucky isn’t just a multi-millionaire superstar actor, he’s given back. Along with his lovely wife, Tiffany, and their son, Glen, Chucky is very active in the Society for Flesh-Challenged Americans.”

His new-found wealth led to a brief acting resurgence, and he once again took center stage in 2004’s Seed of Chucky. I admit, I haven’t seen this one. The title is, forgive me, just a bit too seedy. After the make-out scenes in Bride of Chucky, I just didn’t want to see them go that extra mile.

Happy birthday, Chucky! Next year the brews are on me. And I’ll be the designated driver for the pink plastic ‘Vette… just don’t get any ideas about that back seat.