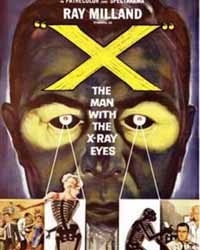 You don’t have to be a mad scientist to get X-ray eyes. You already have them. It’s true. Scientists at Rensselaer Polytechnic Institute and Caltech found that creatures with forward facing eyes (that’s us!) evolved that way so they could see through things. And they say we still can.

Most animals have eyes located on either side of their head, allowing them to better see what’s behind them, but we evolved differently. Mark Changizi and Shinsuke Shimojo, who did the research, suggest we gave up the panoramic view for our secret superpower: X-ray vision.

In short, here’s how it works:

All animals can see at least parts of the world
simultaneously with both eyes. The size of this area, called the
binocular region, grows larger as eyes become more forward facing. The
binocular region is what makes X-ray vision possible.

Hold
a pen vertically and look at something far beyond it. If you first
close one eye, and then the other, you’ll see that in each case the pen
blocks your view. If you open both eyes, however, you can see through
the pen to the world behind it.

The researchers
studied 319 species across 17 mammalian orders and discovered that eye
position depends on two variables: The clutter in an animal’s
environment, and the animal’s body size relative to the objects
creating the clutter. In cluttered environments, which they describe as
leafy surroundings where objects are smaller than the
separation between an animal’s eyes, they found that animals tend to
have a wide field of binocular vision, and thus forward-facing eyes.

“Our
binocular region is a kind of ‘spotlight’ shining through the clutter,
allowing us to visually sweep out a cluttered region to recognize the
objects beyond it,” says Changizi. “As
long as the separation between our eyes is wider than the width of the
objects causing clutter, we can generally see through it.”

Test your power to see through clutter:

Hold up all of your fingers in random directions, and note how much of
the world you can see beyond them when only one eye is open compared to
both. You miss out on a lot with only one eye open, but can see nearly
everything behind the clutter with both.

It
might not be the coolest superpower but it’s something. Not that we
really have occasion to use it in the world we live in now. Which is
why Changizi says it probably won’t last:

“…the things that do clutter our visual field, like cars and
skyscrapers, are much wider than the separation between our eyes, so we
can’t use our X-ray power to see through them. If we froze ourselves
today and woke up a million years from now, it might be difficult for
us to look the new human population in the eye, because by then, their
eyes might be facing sideways.”