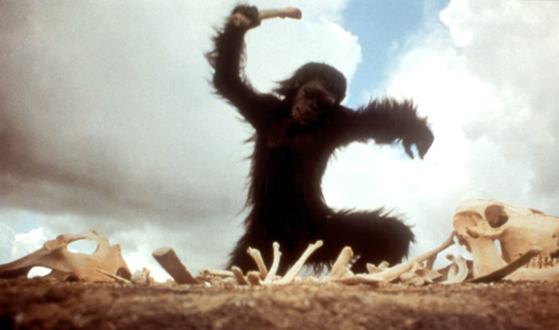 Last Friday I happened to be in New York City and with some friends went to a screening of the 1927 Fritz Lang science fiction classic, Metropolis. The showing was accompanied by the Manhattan Sinfonietta performing a new score by Argentine composer Martin Matalon. I say the word “new” advisedly, since it was was composed in 1993; however this presentation was the U.S. premiere of the score, so it was certainly new enough to me.

Although a silent film, Metropolis has not been without music before, mind you; a complete musical score was written for it by German film composer Gottfried Huppertz when it was released. The score became essential for later film historians: Metropolis has been so chopped over its history that one of the only ways we know what’s missing is to look at the score and see where the holes are (some of the final missing bits of the movie were only recently found in Argentina). Since the 1980s, composing or arranging music for Metropolis seems to be a growth industry — it’s been done five times by folks other than Huppertz or Matalon.

Going back to the Matalon score, I thought it was interesting if ultimately not especially successful; the instrumentation of the Sinfonietta was appropriate, with a mish-mash of electronic and acoustic instruments, and for a fair part of the time, the score matched what was going on up on the screen, particularly the effectively cacophonous opening, in which the visuals of a futuristically industrial city were accompanied by the slamming beats of drummers. But the rest of the time, the music went blandly electronic, which to my mind was no good. Matalon’s score was ambitious and interesting, but ultimately it’s not right for the movie.

Why It Matters
And yes, of course, as with any movie — it matters. Science fiction
like any genre gets a kick from the music filmmakers graft onto it,
because it can act to heighten the emotional impact of what you’re
watching on screen. To register the difference for yourself, I suggest
the following exercise: Go rent (or buy, I’m not picky) the 1931
Universal Pictures version of Frankenstein and the 1935 sequel, Bride of Frankenstein .
The 1931 edition barely has music in it (the compser, Bernhard Kaun,
went uncredited), and for that reason — among a number of others —
the movie seems flat to modern viewers. By 1935, however, Hollywood had
figured out the whole “film score” thing, and as a result — again,
among many other things — Bride of Frankenstein is a richer,
fuller and better audience experience than its prequel (and indeed, is
overall a far better film, but that’s a subject for another column
entirely). For modern moviewatchers, it really is a night and day
experience.

Listening to Matalon’s ambitious, but flawed, score got me thinking
of the science fiction film scores that really make a difference for
their movies. The most obvious one, of course, is Star Wars, whose
themes by John Williams are so monumentally and monolithically
successful that at this point you couldn’t get away from them if you
tried. But I present that one example to get it out of the way; there
are other and in some ways better examples as well. Let me offer you a
few:

Planet of the Apes (1968)
This
percussive and discordant score by Jerry Goldsmith is one of the true
classics, not only of science fiction, but of film scoring in general,
and landed Goldsmith an Oscar nomination. Watch the movie again and
note how the music hits all the right notes, especially during the run
through the fields. Then watch the 2001 version and note how Danny Elfman’s score, while competent, is nowhere nearly as effective, or affecting (and I say that as a huge Danny Elfman fan).

The Day the Earth Stood Still (1951)
Bernard
Herrmann (who for film and music buffs needs no introduction) used not
one but two theremins in this score, giving science fiction its
signature sound, as it were, and also in the process creating one of
Hollywood’s first nearly fully electronic scores. I feel very sorry for
Tyler Bates, who is scoring the upcoming 2008 remake; there’s almost
nothing he can do to make a score as memorable or influential as
Herrmann’s, and I wonder if he’s even going to try.

2001: A Space Odyssey (1968)
Not every perfect science fiction score is written for the film — in 2001,
director Stanley Kubrick famously and creatively married existing
composed works with his images and did such a spectacular job of it
that from now until the end of time Richard Strauss’ “Also Sprach
Zarathustra” will be forever associated with the film. Ironically, the
film did have a complete score written for it, by composer Alex North,
who had scored Kubrick’s film Spartacus ;
the music in the film was originally placeholder music. But then
Kubrick decided he liked the placeholder music more than North’s score,
and kept it — and then forgot to tell North, who learned about it when
he actually saw the film. Which was a pretty cold way to treat the (at
that time) five-time Oscar-nominated composer. That score was finally
released on CD just before North’s death in 1991. Having listened to
North’s score, I can say it’s very good… but Kubrick was right to go
with the music he did.

A question for you: What science fiction film scores are memorable
for you, either positively or negatively? Tell me what sounds work —
or don’t — for your science fiction visions.

Winner of the Hugo Award and the John W. Campbell Award for Best New Writer, John Scalzi is the author of The Rough Guide to Sci-Fi Movies as well as the novels Old Man’s War and Zoe’s Tale, which was released this week. His column appears every Thursday