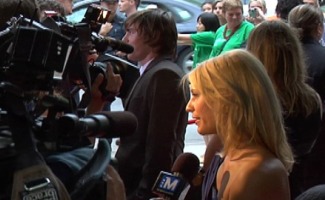 As the 33rd annual Toronto International Film Festival draws to a close, it’s clear the festival is a major player when it comes to launching movies, specialty or big budget. In fact, says Shootout co-host Peter Bart, “there’s a dependency on festivals like it’s suddenly the only way to unveil a movie.” But does that mean you should open your film at this festival, even if Canadians are as nice as the CN tower is tall?

“You can’t just come to a festival,” explains Bart. “It costs maybe a million bucks to mobilize the PR machine, you face negative critics who see four movies a day, there’s an overall kind of downbeat feeling about the specialty films… and it’s so easy for things to get lost.” It’s the second largest film festival in the world so, while audiences might be more receptive than those at Cannes, you still have to get their attention. “Sure, pictures can get discovered at festivals,” notes Bart. “They can also disappear.” On the other hand, there’s a reason so many filmmakers and celebrities keep coming back and it’s not just the gifting lounge.

“There are fans here,” argues Shootout co-host Peter Guber. “They have an embracing attitude.” In regards to money, he says, “it isn’t so expensive as compared to all those ads in all the trades, the newspapers, the prints, the magazines…” When you consider that a full page ad in The New York Times costs $105,840.00, he’s got a point. “This is one of the best ways to get free PR,” explains Guber. That’s why, he argues, there are so many big names on the red carpet in Toronto. “They show up because they know it works.”

The choice to go to TIFF paid off big time for director Darren Aronofsky. His film The Wrestler arrived in Toronto (after winning the grand prize at Venice) without a distributor, but was snatched up for $4 to $5 million by Fox Searchlight. There was even a bidding war. And now there’s Oscar buzz for the film’s star Mickey Rourke. The festival gave a film like Blindness, recut after bad reviews at Cannes, a second chance and helped Steven Soderbergh’s four-hour epic Che (a risky investment if there ever was one) get the distribution deal he and the Wild Bunch really wanted.

One thing is certain: While festival attendance is high, the weekend box-office in the U.S. was the lowest-grossing in five years. If you launch your film at the festival, it will play to a great crowd and perhaps buyers, caught up in the excitement, will forget what’s going on elsewhere.

What do you think? Are film festivals the way to get a movie noticed? Comments open below.