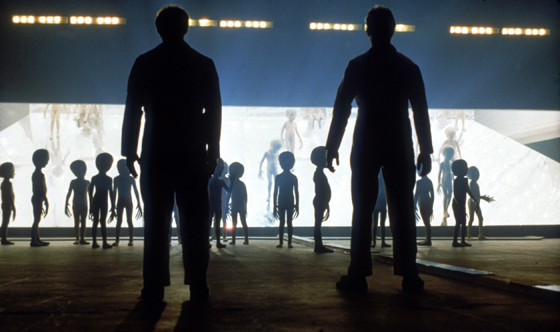 UFOs are nothing new… in fact, they are as old as mankind’s ability to look into the sky and ask himself: “WTF?” In 240 B.C., Chinese astronomers were puzzled by a fast moving flaming object shrieking through the sky… an object we now know to be Halley’s Comet. But there are more interesting historical UFOs. In 1290, a silver disc was reported shooting over Yorkshire. In 1561, multiple sources in Nuremberg spotted a cloud of floating discs and spheres emerging from large hovering cylinders. To date, neither of these haunting UFO appearances have been scientifically explained… although one should, perhaps, note that the peoples of this time also persistently witnessed witches, angels and demons.

Another school of thought tries to link UFOs with Christianity. The link comes from the seeming ubiquity of flying saucers within early Christian paintings. “The Baptism of Christ” by Aert de Gelder, features a saucer shooting a beam down from the heavens upon John the Baptist and a young Jesus. Art experts plausibly explain the appearance of as symbol of the presence of God, but UFOlogists often argue otherwise — that early man mistook extra-terrestrial visitors for supernatural creatures, thus informing early religions in their iconography. Whether you believe that or not is up to you (I don’t), but there’s no doubt its certainly a fun little interpretation.

UFO sightings were not commonly linked with the existence of aliens (if ever) until the 1930’s, when Amazing Stories began publishing luridly illustrated covers of Martians and moonmen zooming through space in iridescent, cylinder-like spacecraft. The editor of Amazing Stories marveled at the success of the imagery: He was amazed by how many letters he began receiving from readers who claimed to have seen objects just like on his cover.

But it was Roswell that pushed the flying saucer into the cultural
zeitgeist for good. On July 7th, 1947, a mysterious object crashed in
Roswell, New Mexico, described by the 509th Bomb Group as a “flying
disc.” Later that same day, the Roswell Army Air Field held a press
conference, correcting the earlier report and showing off debris that
was supposedly from the object… a weather balloon, as the RAAF now
claimed. The Army itself issued a report in 1994, stating that the
so-called weather balloon was likely a secret project by the US Army
Air Forces called “Project Mogul”… a project aimed at using
high-altitude balloons to detect Soviet atomic bomb tests, hence the
secrecy. However, several people reported that the Army also recovered
bodies at the crash site… leading to a conspiracy theory that goes
strong to this day: An alien spacecraft was what landed in Roswell, not
a weather balloon, and the army covered it up.

Whatever the truth, the incident kicked off the 1950s, a decade in
which the flying saucer was practically ubiquitous in science fiction
cinema. 1951 saw Klaatu and Gort land in Washington D.C. to threaten
the Earth with extraterrestrial annihilation in The Day The Earth Stood Still. In 1956, Ray Harryhausen sent hordes of stop-motion-animated UFOs to destroy Earth with their repulsor rays in Earth versus Flying Saucers. Topps’ grisly series of Mars Attacks!
bubble gum cards featured skull-faced, exposed-brained aliens using
flying saucers to invade earth and steal our women. Flying saucers
resurrected the dead in 1959’s schlock classic This Island Earth .

Nor is the flying saucer any less potent a symbol in more modern
years. Steven Spielberg has always been obsessed with the flying
saucer: They make an appearance in E.T. The Extra-Terrestrial and even the latest Indiana Jones movie, Indiana Jones and the Kingdom of the Crystal Skull. John Carpenter’s remark of The Thing
features the virus-like mimick brought to Antarctica by flying saucer,
buried for ten thousand years underneath the glacial ice. Chris
Carter’s The X-Files features the flying saucer as the
primary cruising vehicle of malicious, probing grays. And H2O-allergic
invaders come to Earth in a religious allegory in M. Night Shyamalan’s Signs .

There seems little reason to believe that the flying saucer will
prove any less popular a symbol for aliens and science fiction in the
future. For one thing, flying saucers are simple and immediately
recognizable, yet utterly fantastic: They are a symbol of the unknown,
in that their very shape defies all of our knowledge of the way
aerodynamics work. On the other hand, people actually believe in flying
saucers: A surprising number of people swear they’ve seen them or even
been taken aboard by them. There are even UFO-based religions: Raelians
believe that all life on Earth came from a race of human-like
extraterrestrials named the Elohim, traveling to Earth in flying
saucers.

One thing is for sure — man has been seeing UFOs and flying saucers
in the skies for thousands of years. And no matter what the
explanation, there’s little reason to think humanity will stop
wondering about them… or using them in art.