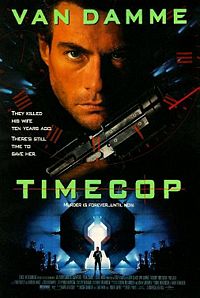 It’s a fact of life that in the movies, mistakes will happen. Sites like Continuity Corner and Movie Mistakes are devoted to documenting the screw-ups for eagle-eyed fans. One surefire way to bring out the obsessives? Include time travel in your movie.

Near-future events can be especially tricky — you’re gambling that certain events and technologies will be plausible by that time. Take The Terminator for example. Judgment Day was supposed to be July 24, 2004, which has passed without a robot revolution. But movies are supposed to be fiction, right? The fact that Judgment Day didn’t occur doesn’t ruin the fun of watching the Terminator series, but with the rise of the Sarah Connor Chronicles TV series, in which characters flit back and forth through time willy-nilly, it’s hard to believe that their actions aren’t affecting the future and the past in a way that is headache inducing if you stop to think about it.

Timecop, one of Jean-Claude Van Damme’s finest movies,
also has to perform some fancy footwork to keep up with its
era-skipping plot. Again, 2004 is an important date, but it’s the
“present day” for this movie from 1994. Van Damme plays an agent for
the Time Enforcement Commission who makes sure that no one is changing
the past, and hence the future, when they travel back in time, as we have managed to do by 2004. There are several scenes in which a newspaper is used
to establish the date — October 30, 2004 a Saturday — but the details around that date and the day of the week don’t match up. Those are the complications come with the
territory.

But perhaps hardest of all to swallow? That by 2004 we’ve
perfected time travel, but still haven’t invented the cell phone.

For a full schedule of Timecop on AMC, click here.