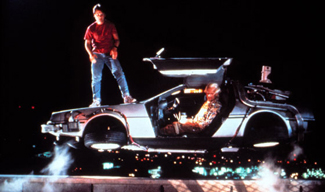 There are obvious benefits to time travel. There’s the get-rich-quick scheme, of course: Zooming back to capitalize on a lusty stock, or buying the Mona Lisa for pennies. And the heroic: What red-blooded American wouldn’t blow up Hitler with a bazooka in 1931? These are fantasies with universal appeal; who wouldn’t want to correct past mistakes or capitalize on future knowledge?

Unfortunately, there is also no way to predict the domino effect that changing the past would have on the future. Messing with the stock market could mess with the larger economy. Destroying Hitler could inadvertently lead to an even worse dictator rising in his stead. Ultimately, time travel’s safest use may be as a dramatic device in a story.

One archetypal time travel story illustrates both sides of the coin: Ray Bradbury’s “A Sound of Thunder.” In this particular tale, a time travel agency called Time Safari, Inc. offers to take people back to hunt prehistoric dinosaurs. When the protagonist veers off a predesignated path and accidentally kills a butterfly, the whole course of history is changed via a time hurricane, the titular “sound of thunder.” When the main character returns to his present, he discovers that humanity is now oppressed by a fascist regime. This story’s notion of “the butterfly effect” is so well-known that it’s become a term in itself. (In The Simpsons update of the concept, Flanders became the evil overlord.)

Some movies of course espouse a theory that time can be changed, with little negative impact. The Back to the Future
series is a good example of that: Marty McFly bounces back and forward in time, and while certain things change, it’s a more whimsical approach. Likewise, Doctor Who
changes time every episode, with no real consequences. This implies that the character isn’t affecting an absolute timeline, but rather, skipping between countless concurrent realities, each with infinitely varying pasts and futures.

Scifi embraces the idea of parallel universes. Star Trek has played with the concept countless times. The underrated Sliders made it its primary plot device. Every scifi show has featured a time travel episode — it is in fact so ubiquitous in science fiction that cataloging its appearances and its nuances is an impossible task. And we haven’t even mentioned H.G. Wells yet. But here’s the question: Is time travel actually possible?

Theoretically, very. A poor man’s time travel would be possible if faster-than-light speeds (with passengers) were possible. According to the rules of physics, anyone moving faster-than-light would effectively stop in time. There is also talk that a machine could create a wormhole that would act as a time portal.

But, for now, such possibilities remain theoretical, and thus, only science fiction.

To see the best uses of time travel, click here.

To vote on the best uses of time travel, click here.