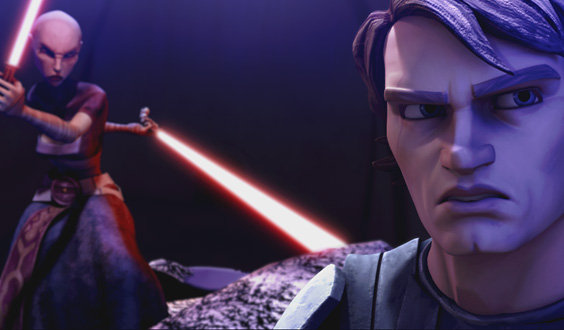 For those of you who complained that the three Star Wars prequels felt too much like cartoons, Star Wars: The Clone Wars should feel like a natural progression in the franchise.

Set between Episodes II ( Attack of the Clones ) and III ( Revenge of the Sith ), Clone Wars starts with a faux newsreel catching us up to speed: Generals Anakin Skywalker (Matt Lanter), and Obi Wan Kenobi (James Arnold Taylor) are fighting Count Dooku’s droid army to a standstill; Jabba the Hutt’s son has been kidnapped, and the Jedi are tasked to find him. On the way, we get to see a little how an army of millions of clone troopers differentiate themselves (different haircuts), Anakin gets a spunky young Padawan learner (Ahsoka Tano, voiced by Ashley Eckstein, and the ostensible star of the movie), and we meet Jabba’s gay uncle. Seriously.

The largest problems with The Clone Wars lie not in
the movie, but with the direction of the series: The universe is too
small, and ultimately, the focus seems to be on creating toys rather
than characters. However, if you can get past all of that, The Clone Wars manages to improve on the prequel trilogy in subtle ways.

For one, it’s far easier to see how the animated Anakin, who has
dark circles around his eyes and a permanent scowl, is struggling
between his Dark and Light sides, moreso than the petulant pretty boy
played by Hayden Christensen in the prequels. But plot is almost secondary to massive, fluidly staged battle sequences: A vertical battle up a thousand foot tall
cliff wall is appropriately dizzying and visually stunning; the droids and clone troopers
look like they were lifted directly from the live action movies. The
kiddie humor, which seemed so shoehorned into the prequel trilogy,
works here —  the battle droids constant vaudevillain back and forth
makes perfect sense in the cartoon context.

Because of all this, it’s almost not worth getting upset about a Poochie like Ahsoka Tano, when the Star Wars
movies have seen more than their fair share of Poochies. For those of
you not familiar, Poochie is a character from one episode of The Simpsons,
created specifically to be extreme, cool, and appeal to the kids. It’s
a metaphor for giving the audience what you think they want, rather
than what they actually want, and it rarely, if ever works. It does not
work here: Ahsoka is meant to appeal to young women, and bully for
that, except that she doesn’t add anything to the plot or movie.

But that’s quibbling. Though this may seem like faint praise, Clone Wars
is far better than it had any right to be. It doesn’t reach the heights
of the original trilogy. It doesn’t even reach the superlative heights
of Genndy Tartakovsky’s similarly named Clone Wars series.
But it does hold in step with the prequel trilogy, and even manages to
wipe a bit of the bad taste from those films by staying true to what it
is. It may not be the Star Wars we asked for, but it is the Star Wars we’re going to get from now on.