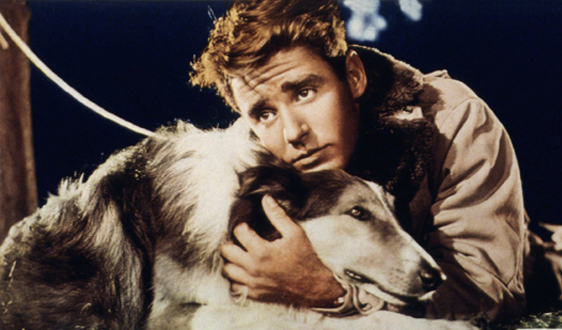 A few blogs back I talked about people who just had to be serial killers. David Lightman, Ron Burgandy and “The Painter” made the list. Much to my surprise, the SPCA and PETA got in touch.

“What about the rights of animals?” PETA asked in an email. “The thumb-deficient can also be successful killers.”

I had to agree with them, and not just because they had two people waiting outside my apartment door with buckets of pig blood (not only are the PETA supporters anti-fur, they are pro- Carrie ). It got me to thinking — there have to be some animal actors that have just had it up to here with being cute, cuddly and saving the day. How boooooring. Now there have been some world-class killer pets, from cyborg Rottweilers in Man’s Best Friend to Satanic shepherds in Devil Dog: The Hound of Hell to Gizmo’s little friends in Gremlins … but I think there is much more eee-vil to be had out there.

Lassie II: The Jugular
Don’t lie, you want this. Those of us old enough to remember those disgustingly sweet Lassie episodes know that collie has some serious pent-up rage. Little Timmy is back in the well? Do you really think Lassie wants to save that idiot kid again? Any fool could see that well was dangerous. Maybe, just maybe, it’s time to take Timmy out of the gene pool for the betterment of humanity. We can’t make Lassie rabid ( Cujo ), a cyborg or possessed by Satan (see above) or a lycanthrope (just about any horror movie made in the past 10 years), so I think Lassie is going to go with the hardware. A nice, mouth-controlled chainsaw, and the well is the least of Little Timmy’s problems.

Every Which Way to Hell
This is a little-known sequel to two Clint Eastwood cult classics – Every Which Way But Loose and Any Which Way you Can .
These are flicks about a truck-drivin’ bare-knuckles fighter who
travels the country with his pet orangutan Clyde (and yeah, this was a
touch before Clint’s Oscar-winning days, but you may have guessed that
already). In the third and final installment of this franchise, Clyde
discovers Clint’s steroid stash and knocks back a massive dose of
experimental HGH. Clyde also discovers a year’s supply of NoDoz, eats
it all in one fell swoop, then goes on a murderous rage through every
Flyin’ J truck stop on the Ohio Turnpike. Right-turn indeed, Clyde.

Charlotte’s Web II: The People Roast
Wilbur
may be “some pig,” but he’s not going to live his life in fear of the
butcher. Wilbur takes up the martyr flag and drives around the country
in a Ford F50 towing a jet-black pig roaster — only this baby ain’t
for pigs anymore. After accidentally getting 1987’s Blood Diner
in a Netflix mix-up, Wilbur decides to open up his own roadside
barbecue stand during the day, and “stock up on fixins” at night. Try
the human hocks and the people knuckles. Dee-lish.

The Abyss II: Beany’s Revenge
Say
you’re a harmless, cute little white rat. You belong to this dude with
bad dental hygiene, and you live in a big bubble at the bottom of the
ocean, but it could be worse. Then this idiot thinks it’s “in the best
interest of science” to dunk you in water and drown you every five
frickin’ minutes. And then, he holds you up by the tail while you puke out the water as all of his friends watch and laugh. Oh yeah, science is just great,
isn’t it? Well, thanks to some gene modification from your friendly
neighborhood tidal-wave-whipping alien buddies, it’s about time you got
some serious payback. Things are different now that you weigh 500
pounds and have a set of choppers that would make Julia Roberts die of
envy. Word is that James Cameron has already signed on to direct this
one, with Ron Perlman to star as Beany.

Death March of the Penguins
You knew this was coming. The stars made so much money of March of the Penguins,
they invested it in military hardware, nukes and mercenary troops. Just
as in the original flick, this one is human-free. The Penguins decide
to expand their territory, so they roll tanks onto the seal beaches and
start a species cleansing. Expect intense scenes of baby harp seals
being forced to march through the steamy jungle until their little
flippers fall off. Morgan Freeman is signed on to once again provide
his soothing voice — “Little Fluffy marched until she died of
dysentery and her flippers were nothing but raw, bloody stumps. Now
isn’t that something?”

So treat your pets well, my friends. You never know when that goldfish of yours will tune into Piranha II: The Spawning and you’ll have a whole new pet food problem on your hands.