Now that M. Night Shyamalan, the former Elvis of horror, has clearly left the building with The Happening, we fans of the macabre are looking around for the next big thing. A strong contender for that title is Alexandre Aja, director of Haute Tension , P2 , and the remake of The Hills Have Eyes . The 30-year-old Frenchman could really put himself on top with Mirrors, which stars Kiefer Sutherland and hits theaters tomorrow, August 15.

Mirrors is getting the promotional big-boy treatment. You’ve probably seen the ads, posters and the trailer, which is intriguing. What’s really intriguing, though, is that the producers have released the first three minutes of the film as an R-Rated online trailer. Get out your raincoat, this piece of film is messy.

Sutherland, of course, is the kingpin of 24, the long-running thriller TV series (come on, say it with me, “WHERE IS THE BOMB!?”). I’m sure Sutherland’s patented growly-scream will be out in full force for Mirrors. It’s great to see him jump into a horror movie. He did Taking Lives in 2004, which cast him in the serial killer mode, but Mirrors is supernatural horror and looks spooky as heck (at least from that splattery three minutes above). 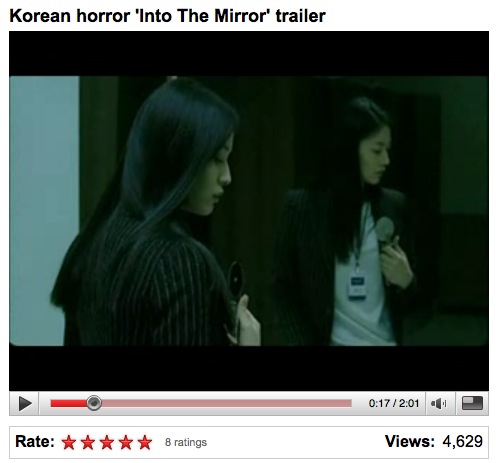 Curse of the Remakes
The movie looks
strong, but be warned — the film has two major strikes against it.
First, it seems the movie is yet another Americanization of an Asian
horror flick, this time the 2003 Korean film Into the Mirror
directed by Sung-ho Kim (check out the original trailer by clicking on
the image at left). My country’s track record for re-making Asian
horror flicks has been abysmal of late (as evidenced by my review of Shutter), so I’m heading into this one with low expectations.

The second caveat is that it looks like the movie marketing hacks have been front-loading ten-star reviews at IMDB.com. When a movie has 160 voters before it even comes out, 106 of which gave it 10 stars, and has only one comment,
that’s a hint-and-a-half the producers are trying to game the ratings
before real movie watchers put in their two-cents worth. The last movie
for which I noticed this behavior was the
please-put-forks-in-my-eyes-it’s-that-bad Andromeda Strain, a
made for TV movie that had over a hundred ten-star reviews before it
even aired. I could be wrong, but if it squawks like a duck …

And as long as we’re on the subject of Asian horror remakes and
movie marketing, let’s talk about posters, shall we? It could be my
imagination, but I’m starting to notice a bit of a pattern here. Let’s
see, I think the remake checklist goes like this:

1. Buy rights to successful, innovative Asian horror flick
2.
Have someone “Americanize” the script, because we’re so stupid we
couldn’t possibly understand it the way it was told the first time (you
know, when it was both successful and innovative)
3. Have said script rewritten by a team of interns and the producer’s half-brother so that it has zero continuity
4. Insert a TV star as your lead actor/actress
5. Make a movie poster with a spooky face
6. Laugh all the way to the bank, because we’re so stupid (see Step 2) that we’ll probably go see it anyway

Come
on, Alexandre, I’m pulling for you to break the mold, but looks like
you’ve already got Step 1, 4 and 5 locked in. Let’s hope you skip steps
2 and 3, and if you do, well, by golly, Step 6 will be all yours.