I’m late to the Dexter bandwagon. This light-hearted horror series is heading into its third season on Showtime, and I’m just getting started on the Season One DVDs. I have to say, the concept is awesome: Imagine a child adopted by a cop. This cop sees all the horrors of humanity, and he knows how to spot damaged goods. When the family dog turns up buried in the back yard — along with the bones of many other neighborhood animals — the cop realizes that his adopted son is a serial killer in the making. Here’s where the premise gets very, very clever: The cop knows pathological behavior, and knows damn well that no matter what he does, eventually the boy will follow an overpowering compulsion to kill. To keep his child safe, the cop teaches the boy how to blend in (and how to kill only those that deserve to be killed). Which got me to thinking: What other serial killers are hiding in plain sight? Perhaps there is a checklist of attributes: Handsome, engaging, funny but with a certain internal blankness that can’t be defined. I sense a list coming on…

In 1985, a kid hiding in his room and pretending to be someone else on his computer was considered interesting and nerdy. Today, we call that same person an online pervert. Oh sure, David Lightman was the computer wunderkind who first put the whole planet in jeopardy, then saved said planet, but let’s look deeper into his behavior, shall we? A loner. Neat and tidy. Anthropomorphized inanimate objects. Pretended to be someone he is not. Oh hell yes, he’s a serial killer. And if someone who looks like David Lightman doesn’t just perfectly fit the “To Catch A Predator” profile, then I’m turning in my Chris Hansen fan club dog tags right this instant. 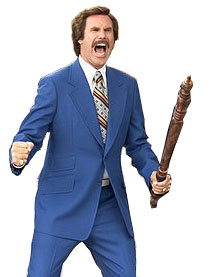 The clothes, the hair, that stare — there’s more repressed rage here than in a sub-prime mortgage lender. Burgundy clearly has no conscience and kills at will. His anchorman/reporter status allows him to come and go as he pleases, gets him near crime scenes, and that smooth voice lets him talk his way out of just about anything. Burgundy uses his fame to lure female victims back to his swingin’ bachelor pad. In his basement… a full recreation of the Emeril Lagasse set. The sad truth is Ron didn’t want to be an anchorman, he wanted his own cooking show. He smiles to his closed-circuit cameras as he cuts up his victims, cooks the pieces at 350 degrees for 30 minutes or until tender, then BAM! … throws on some cilantro, a splash of Scotch and digs in.

Name: The Painter ( Moonlight and Valentino )
Serial Killer Name: Uh, The Painter
Weapon of Choice: Aquanet and a lighter

Jon Bon Jovi isn’t exactly a horror icon, but he has a couple of flicks under his belt (Cry Wolf and Vampires: Los Muertos). If you want to see him at his serial killer best, however, look no further than 1995’s Moonlight and Valentino. There is no way, just no way, his character isn’t a serial killer. Come on! I mean, right off the bat, his name is “The Painter.” That’s it, just “The Painter.” See how it rolls off the tongue, like “The Creeper,” or “The Thing?” And just look at him, all smiley, playing the sensitive role and finding ways to get multiple women alone and vulnerable. That’s right, cupcake, open your heart to “The Painter” and share your pain … This dude fits the Ted Bundy profile so perfectly I wonder if Ted’s real name is Ted Bon Bundi.

So you see? It’s not just Dexter; serial killers are all around us. Watch out for the handsome guys, the ones who always have a smile and something nice to say. And whatever you do, make sure you watch your behind if a GeekSquad VW shows up unannounced, or someone mails you free backstage passes to a Monsters of Rock reunion tour. That’s just some bad medicine waiting to happen…

Scott Sigler writes tales of hard-science horror, then gives them away as free audiobooks at www.scottsigler.com. His hardcover debut Infected is available in stores now. If you don’t agree with what Scott says in this blog, please email him scott@scottsigler.com. Please include all relevant personal information, such as your address and what times you are not home, in case Scott wishes to send someone to “discuss” your opinions.