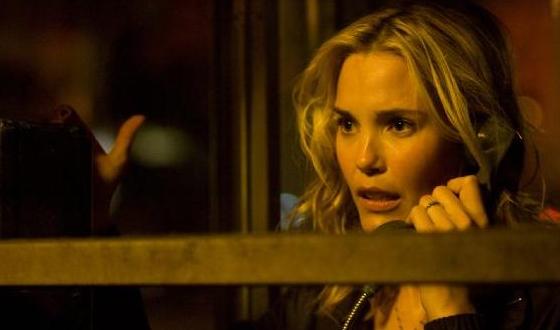 scary sack-mask — at least, I hope not. But Bibb does have a part in Trick ‘r Treat, director Michael Dougherty’s embattled love letter to his favorite holiday. She also starred in the recently unveiled Midnight Meat Train, which has accrued a pile of favorable reviews. So what’s a nice girl like Bibb, whose past credits include the teen show Popular and films like Talladega Nights and Iron Man, doing in such gruesome territory? “I think you have to really sit down and start to do that — to explore the unlikeable side of you,” she explains. “In horror movies, there’s always the token screaming girl running around, but we wanted to explore who she was, so it became much deeper than that.”

Bibb knew from the outset that she was on unfamiliar terrain. “I’m
not a horror buff — I took the job because of Bradley [Cooper] and
Ryuhei [Kitamura, the director], and the challenge of making the
character more than what she was. But I’m also a complete scaredy-cat!
I’ve never really seen a scary movie in its entirety.” That can be a
liability in her field, and Bibb knows it. “I still can’t make it
through The Exorcist,
which is ridiculous because Ellen Burstyn’s work in that role is
something I know that I, as an actress, should have in my memory to
help with future performances. I barely made it through Alien. My boyfriend says he’s not sure whether I’m the worst person to see a
scary movie with, or the best, because I get so scared.” So why these two terrifying projects then? “I thought working on MMT would be the perfect
opportunity for me to get over my fear of scary movies,” she says. “But
it was the opposite — I was literally having panic attacks. I hated
the set, even though it was just an apartment building, it was still
really scary. I freaked myself out so much that I fell during one scene
when I was running down a hallway. I became that cliché, where that
girl falls running away, except it wasn’t in the script — I was just
so panicked!” Bibb laughs, “And of course that’s the take they used.”

As for Trick ‘r Treat — which Bloody-Disgusting has already reviewed —
we’re still waiting for a release date, and Bibb’s looking forward to
it as much as anyone else. “Mike Dougherty is such a fan of the horror
genre; he’s so dark,” she says. “It’s definitely not your typical
horror movie. It’s shot very interestingly… I don’t want to
give it away… The film is made up of four shorts that all come
together and intersect, and there’s always this very dark humor behind
the gore — and especially what happens to me!” In all, her foray into
horror has been very educational. “There are so many generic horror
movies made these days, but I’m proud of these two,” she says. “MMT was just so masterfully directed… and with Trick r’ Treat I feel on some level like I’m getting back at all the people who did horrible things to me in high school!”

These are the kind of teases that keep genre fans on the edge of our seats. What with her run on the darkly satirical Popular, her Iron Man
role, and now, her horror resume, Bibb is amassing a critical amount of
nerd cred. And while she wasn’t able to make Comic-Con this year, she’s
already thrilled for the next one. “There was a screening of MMT this
year, and it got a great review. I tend to look at those sorts of
reviews more, because these fans know their stuff. I’d love to just
walk around and explore, but I’ve never gotten to,” adding, “Maybe next
year I should just show up — like with my own table. And be like, ‘I’m
here! I’m not selling anything, I’m just here!”

In the meantime, don’t expect her to leave her dark side behind anytime soon. She recently finished filming Miss Nobody,
an independent film about, as Bibb puts it, “a woman who, in her
pursuit to climb the corporate ladder, may or may not start killing
people — at first by accident, but then maybe actually getting good at
it.” Bibb also served as producer, and relished the experience of
finally having some leverage in determining a film’s outcome, “I can’t
comment on the situation with MMT and Lionsgate because I really don’t understand it. I think it’s bigger than everyone involved,” she says. “However, In the case of Miss Nobody, I’m also a producer, so I am involved.
It’s part of my job: working my ass off and coming up with ideas,
raising money, being on set when I’m not acting, helping out with
casting. It was thoroughly hands-on — and still is.”