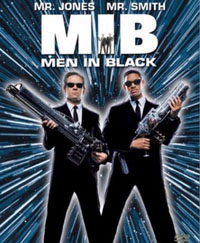 Ever wonder how the alien Jack Jeebs in Men in Black is able to regenerate his head? He doesn’t like doing it but, still, whenever Agent K shoots him in the head, he just grows a new one. That’s useful. Or how is it Wolverine can quickly regenerate and heal the damaged parts of his body? Based on a recent paper in Genes & Development, it could be an overabundance of laminin-511, a molecule that signals cells to start growing hair.

Scientists at the Stanford University School of Medicine used
genetically engineered mouse embryos to demonstrate that laminin-511
signals embryonic stem cells in the skin to start growing hair. “Now we
have a signal protein that can support the micro-environment for hair
development, and maybe also for hair renewal,” said lead author Jing
Gao, MD.

The work has implications beyond hair growth: Scientists
say the molecule could play a role in the development of other organs
and limbs. “Laminin-511 acts at the crossroads between cell compartments, helping the cells communicate,”
said senior author Peter Marinkovich, MD. “It works through antennae
called primary cilia.” Those primary cilia also help drive formation of
kidneys, craniofacial structures and limbs.

Could it be that our
body has the ability to regenerate but just forgot how to communicate
it? In an attempt to study this lost language, other scientists are
sequencing the genome of axolotl salamanders . “You can do anything to
it except kill it, and it will regenerate,” says Gerald Pao, a
postdoctoral researcher at the Salk Institute for Biological Studies,
in La Jolla, CA. Salamanders and newts are the only vertebrates that
can grow entire organs and replacement limbs as adults.

Biologist
David Gardiner, also working on the project, believes regeneration
comes from a fundamental ability now lying dormant in mammals. Gardiner
thinks the skill can reawakened with some genetic nudging. He told Technology Review,
“Most of the tissue in our arm regenerates; it’s just the arm that
doesn’t regenerate,” he says. “What’s missing is how you coordinate a
response to get an integrated structure.” See Gardiner’s team at work here.