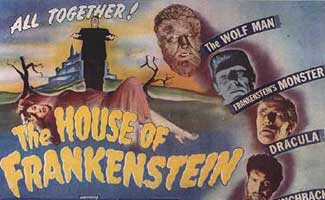 It’s not hard to imagine the logic that brought House of Frankenstein to life in 1944. If a regular monster movie can be a hit, then one featuring Dracula, the Wolfman and Frankenstein should make millionaires of the producers! While that didn’t prove the case, the tradition of holding monster reunions is a longstanding one. Here are a few fright flicks that owe more than a passing debt to House of Frankenstein.

• The Monster Squad (1987): The Mummy was meant to be included in House of Frankenstein as well, but wound up being cut due to budget constraints. Here he and the Gill Man join the posse to hunt down a magical amulet. It’s said that Liam Neeson nearly took the role of Dracula.

• The Addams Family (1997): While the classic TV show was inspired by the cartoons of Charles Addams, it’s pretty clear that both the series and the films owe a larger debt to classic monster mash pictures with one exception: here normal, everyday humans are the bad guys.

• Operation Terror (1970): This exquisitely low-budget Italian horror film explains what keeps bringing all these monsters back to life: aliens! Trying to dominate the world by capitalizing on our worst fears, extra-terrestrials resurrect a vampire, a werewolf, a mummy, and Frankenstein’s monster. Terror indeed.

• Waxwork (1988): A true return to roots, this B-movie pumps lots of gore into well-worn scenarios. When a bunch of teenagers discover go beyond the velvet rope at the wax museum, they discover a world where the monsters are all-too-real. Of the bunch, it’s the scariest heir to House of Frankenstein’s legacy.