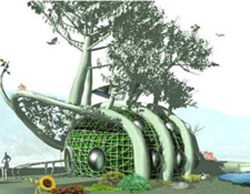 In The Lord of the Rings , Mellyrn trees provide protection for the Elves of Lothlorien. They don’t cut them down to construct a safe haven; they live in them. In our world, aeroponic trees can help you in the same way.

These trees aren’t golden or enormous like a Mallorn; their magic lies in their flexibility. When grown aeroponically (in air instead of water), scientists discovered that certain species do not harden. Researches at the University of Tel Aviv and a company called Plantware are working to turn those malleable, living trees into useful and stable structures. “The approach is a new application of the well-known botanical
phenomenon of aerial root development,” says Prof. Eshel of TAU.
“Instead of using plant branches, this patented approach takes
malleable roots and shapes them into useful objects for indoors and
out.”

The possibilities are endless: A children’s playground made from the
organisms could be the first real jungle gym; a bus stop could grow its
own foliage to keep riders dry and in the shade; streetlamps could
light the street and improve air quality. For those that are really
adventurous, the company is even planning to create an entire home, as
illustrated in the picture here. Pilot projects are now underway in the
United States, Australia and Israel.

Plantware’s CEO Gordon
Glazer hopes the first home prototype will be ready in about a decade.
If you’re serious about going green, get ready to grow your own home.

[Photo Credit: A computer-generated illustration of a TAU/Plantware, AFTAU]