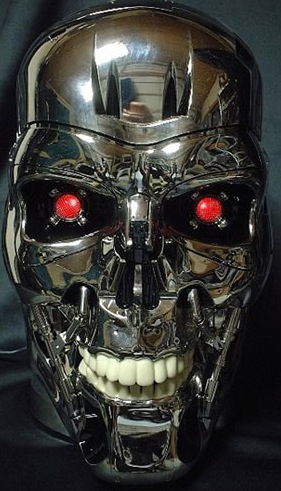 • The Terminator skull DVD player is nifty, but given its lack of Blu-Ray, seems to indicate that Sony will not win the high-def format wars before Judgement Day.

• The future of warfare, retro style. Hovercars and rocket men!

• SF Signal gives an overview of all the Star Wars games currently in production. The real one I’m looking forward to is Bioware’s MMORPG based on the Knights of the Old Republic universe, which is Star Wars thousands of years before The Phantom Menace.

• Maxim lists the unsung heroes of Star Wars, which features a surprising amount of details on all the ancillary background characters in the films.

• Incredible Hulk scribe Zak Penn will write the remake of Jason and the Argonauts. I’m skeptical unless stop-motion skeletons are ponied up.

• A Xenomorph vs. Predator chess set to absolutely kill for. Checkmate = Face Hugged.

• And if that’s not enough for you to break out the old opening books, check out this wonderful Star Wars LEGO chess set.