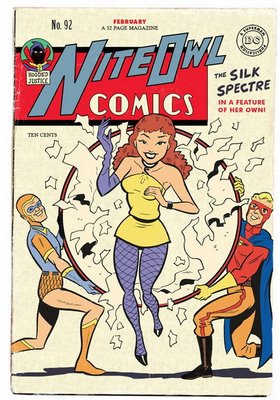 • Geeks of Doom reviews Star Trek: The Clone Wars: “I don’t know whether it was the fact my hopes were so low, or if it was just in fact a good film, but I really liked Star Wars: The Clone Wars.”

• And speaking of, the callow folks at Ain’t It Cool News pulled a negative Clone Wars ad because of LucasArts strong-arming. God, Knowles. You’ve been in this game forever, and you’re still just an easily-cowed fanboy. Blogging 101: When a company threatens you and you’re in the right, you go public, and watch the company fold under the negative publicity.

• Also speaking of: George Lucas says Star Wars is not scifi. He’s actually right for once.

• A gorgeous alternate reality comic cover from the Watchmen universe.