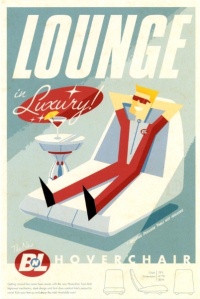 In the futuristic time period of Wall-E, the humans don’t look so good: We’re fat, lazy and oblivious. What went wrong? Certainly technology is part of the problem — why get out of the Hoverchair when a robot is there to take care of your every need, right? But the truth is, the behavior of those on board the Axiom has more to do with microgravity; after so much time in space, even the most self-reliant, athletic and ambitious person would have difficulty functioning.

Director Andrew Stanton, in an interview with Comingsoon.net, talked about the influence of zero-gravity on the humans he created:

…the reason we don’t send a man out to Mars right now is because if we do, they’ll come back with almost no bones because disuse atrophy will kick in with very little gravity and osteoporosis will occur and you will lose a large percentage of your bones, and you’ll just be this jello blob… I thought that was a great metaphor for having to grow up again and stand on your own two feet.

Biology in Science Fiction
blogger Peggy Kolm explains the dangers facing those orbiting the Earth
in more detail. “Bone loss is indeed a serious side effect of
weightlessness,” says Kolm. “And that’s not the only problem. In
weightless conditions astronauts can lose significant muscle mass, and
blood volume can drop 20% causing the muscles in the heart to atrophy.”
As if that wasn’t enough, she adds, “Internal fluids shift to the upper
body and head, causing swelling.”

Astronauts on long-term missions
spend a lot of time exercising to counter the inevitable muscle and
bone loss that occurs, but no ship has been away from Earth for over
700 years, as is the case in the film. Studies of today’s space
travelers show that they can lose (on average) 1 to 2 percent of bone
mass each month and in some cases the rate is much higher. At least
Astronauts regain their bone density when they return to Earth, but it
takes two to three years and that’s after just a three to four month
trip. “Without a regular exercise program that combats those
physiological changes, living in space could indeed be permanently
crippling,” writes Kolm.

In short: Lazily riding around on your Hoverchair might be OK. Just don’t get too far off the ground.