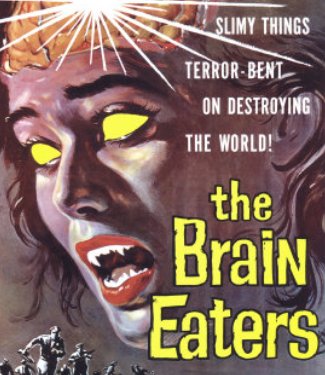 If there’s a downside to being an imaginative science fiction writer, it’s that you have to constantly watch out for Hollywood scavengers snapping up your ideas and failing to give you credit. That’s what happened to Robert Heinlein with The Brain Eaters, the 1958 film about a plague of parasites from the center of the Earth. Heinlein recognized the plot as belonging to his novel The Puppet Master and sued, settling for a $5000 payment. When this sort of thing happens, is it a compliment to the writer or an insult to the the integrity of the ideas? Either way, it happens more often than you think:

• Though James Cameron gave credit to two of Harlan Ellison’s episodes of The Outer Limits for inspiring the “original” Terminator film, studios feared a lawsuit and ultimately paid a settlement to Ellison to keep from being, well, terminated.

• Author Sophia Stewart attempted to sue filmmakers of both Terminator and The Matrix, claiming similarities to a manuscript she penned in 1983, The Third Eye. She claims to have submitted the script (which contains elements of both films) to the Wachowski brothers in 1986. To date, she has been unable to file a successful lawsuit against any party.

• When the movie Hardware debuted in 1990, the writers of a story called “Shok!” from the British comic 2000 AD sued to receive writing credits — and won.

• In 2006 the makers of The Clonus Horror sued Dreamworks over similarities to the Ewan MacGregor summer blockbuster The Island. The specific terms of the resulting settlement are sealed, but it’s known that the Clonus gang snagged seven figures for their pains.

Let this be a warning to all futuristic filmmakers: Audiences may always enjoy wild sci-fi adventures like The Brain Eaters, but keeping your eyes on your own work may save you big bucks in the long run!

For a full schedule of The Brain Eaters on AMC, click here.