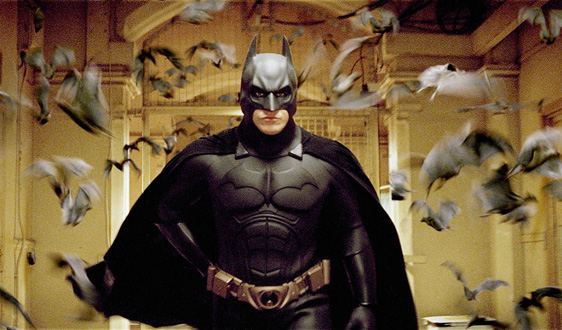 Unless you’ve been living under a rock that’s, like, 20,000 leagues under the Earth, you’re probably aware of the forthcoming sequel to Christopher Nolan’s Batman Begins , The Dark Knight. While most of the world (including yours truly) is looking forward to the film with bated breath, it’s but one part of the current wave of Bat Mania ’08: Arriving this week, a Blu-Ray release of Batman Begins, and for an animated fix of the World’s Greatest Detective, Batman: Gotham Knight and Season 5 of The Batman also hit shelves.

I’ve been a comic book fan pretty much my entire life and though I tend to shy away from discussions regarding such philosophical conundrums as “Who can punch harder, Hulk or Superman?”, I’m not a complete comics ignoramus. I know how Peter Parker became Spider-Man, I know that “Spider-Man” is hyphenated, and I own a copy of Mr T and the T-Force #1. It goes without saying that my tastes in all things comic book tend to run toward the horrific (in fact, I talked a bit about that right here in these very cyber-pages), so it should come as no surprise that my favorite superhero is Batman. The dude is scary. Most of the wackos comprising his Rogues Gallery are scary.

Now, before you get all “Say what?” on me, bear in mind that I’m not talking about the campy TV show Batman. I’m talking about Batman in his purest form — the guy who wears a cape and hangs out on rooftops, the guy who saw his parents murdered and hasn’t been quite right since, the guy who hides in the shadows and takes his namesake from an animal most people are afraid of. Let’s face it, he’s a nocturnal weirdo.

Batman’s ties to the film world of horror and scifi have been
explored in numerous comics over the years; he’s gone up against the
Predator of Predator , Dracula of Dracula , and the Aliens of Aliens to name but a few (in fact, his battle against the Predator has made it onto the screen, sort of, in the fan film Batman: Dead End). The obvious vampire correlation to the Bat has been touched on in several titles, including Batman: Nosferatu and Batman: Crimson Mist. I’m tellin’ ya, gray tights or no gray tights, Batman is all about the horror. Can Batman vs Jason be far behind? Now that I think about it, that might be kind of awesome. Ooh, I’ve got it! Friday the 13th Part 14: Jason Takes Gotham City. Hollywood, let’s make it happen!

On
the outskirts of Gotham sits the city’s own ersatz house on haunted
hill, Arkham Asylum. Named after Arkham, Massachusetts, the fictional
city created by HP Lovecraft, the hospital houses some of the most
notorious cuckoo nutsos that Batman has ever managed to capture —
folks like the Joker and the Scarecrow. The asylum has a
rightfully-deserved bad reputation; I mean, the frequent escapes
indicate a security team that’s lacking, and the rate of recidivism
amongst the “cured” patients seems to be pretty high.

The
hulking building looms high atop a hill looking all kinds of sinister,
as if it belongs in such scary building-themed horror movies as The Haunting or Session 9 . For my money, two of the best Batman comics revolve around the creepy sanitarium: Arkham Asylum: A Serious House on Serious Earth, a graphic novel that finds Batman heading into a hospital that’s been taken over by the patients, and issue 400 of Batman,
a massive anniversary issue that sets all the inmates of Arkham loose
on Gotham City. Both books gave me the willies numerous times over,
thanks in large part to the art of Dave McKean and Bill Sienkiewicz.
Their cackling Jokers and lurking Scarecrows are enough to keep this
horror fan satisfied, although I’d give my left foot (or at least a
copy of My Left Foot on DVD) to see either of these two stories adapted for the big screen.

Part of the reason I’m so excited to see The Dark Knight
is because it seems that it’ll follow a wee bit more in this vein, that
notion of real danger, of horror, of psycho villains who are actually
scary. Clips I’ve seen of the late Heath Ledger as the Joker (a
performance that’s got a few critics already talking posthumous Oscar
nomination) show a bad guy who stacks right up against your Jasons and
your Michael Myerses, a bad guy who’s a pure psychopath, a maniac in
facepaint that’s creepy enough to give one pause. I don’t doubt that
he’ll be the most frightening foe the onscreen Caped Crusader has had
to face yet — unless, of course, you count the pun-spewing Mr. Freeze
of the atrocious Batman and Robin , although he’s frightening for entirely different reasons.

So,
does Batman always equal horror? No, not always but it’s kind of like a trip to the grocery store. Sometimes the grocery
store is all bright lights, free salsa samples, and a Juice Newton song
over the loudspeaker. At other times, while wandering the aisles
looking for the bread… you feel as if you’re trapped in a deleted scene
from Jacob’s Ladder . I think you know by now which experience I prefer.

A fan of horror movies and scary stuff, Stacie Ponder started her blog Final Girl so she’d have a platform from which she could tell everyone that, say, Friday the 13th, Part 2 rules. She leads a glamorous life, walking on the razor’s edge of danger and intrigue