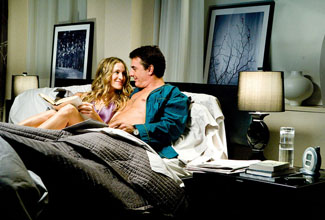 Why would a movie as violent as Hancock get a PG-13 rating, while the Sex and the City film and Will Ferrell’s Step Brothers were given R ratings? That’s the question posed by Shootout co-host Peter Bart in a discussion of what he calls the “squishy” movie ratings system. Bart wants consistency, saying, “There’s a significant conservative population in this country who want their children to be protected from extremely bawdy and violent movies. And it seems to me, at the very least, the industry has an obligation to say, “This is the code, this is what it means.”

The movie ratings system is system operated by the Motion Picture
Association of America (MPAA) and the National Association of Theater
Owners. The ratings are determined by a board of parents — the
Classification and Rating Administration. Board members view each film
and vote on a rating after a group discussion. There are five ratings:
G (all ages admitted), PG (some material may not be suitable for
children), PG-13 (some material may be inappropriate for children under
13), R (under 17 requires accompanying parent or adult guardian) and
NC-17 (no one 17 and under admitted).

Highlighting the difference between sex and violence in the movies,
co-host Peter Guber responds, “Putting a pillow under a woman’s rump
can make the film an NC-17 or a R. But slitting somebody’s throat, you
get applause and you get a PG-13. And that’s what the world’s come to.”
Bart advocates eliminating the NC-17 rating, making the R rating
“strong” and ensuring that PG-13 and PG be “a little more restrictive.”

Guber points out that “the real issue is does the code serve its
purpose of informing parents reasonably well so they can make a
decision? Not the government, not the theaters, not the distributors,
but the parents.” He continues, “Information is fine, but parents have
to do their job. It’s the job of the parents to deal with and control
what their young children see.” Bart argues it’s difficult for parents
to control their children’s viewing habits, what with
pornography on the Internet, DVDs so easily accessible and video games so violent. Guber concedes, “It’s like stopping a tsunami with a
popsicle stick. There’s really very little chance of preventing someone
who wants to get a look at any of these films from seeing it. You just
have to hope that the information itself will be useful for the
parents.”

Do you think the current ratings system works? Does it need to be
revamped? Are parents ultimately responsible for what their children
see? Comment below.