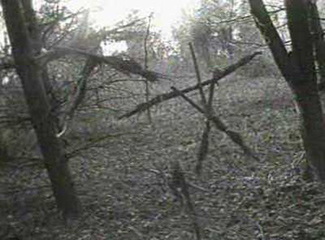 It’s not every day you open your mail to find a test tube full of some random red fluid. Well, maybe not for you — my fans send me their blood about every other day — but I mean, in
general, a test tube full of blood in your mailbox is weird. The vial
in question was labeled “TruBlood” and had a piece of paper attached with all kinds
of weird writing. Being a child of the Internet, my first reaction was
“I have no idea what this pseudo-Sumerian writing is, I’ll look it up
online.” And exactly 0.25 seconds later, my second reaction
was, “Oh … another viral marketing campaign.”

True Blood
My instincts were right. The tube was part of a viral marketing campaign for HBO’s new vampire series, True Blood. Based on a series of books by Charlaine Harris, the show is a clever new take on the hackneyed genre of vampires and nubile vampire hunters, where development of a
synthetic human blood replacement allows vamps to come out of the
shadows and live among us.

This post isn’t about the series (which I haven’t seen), but about the viral marketing of it. Are fake
websites the future of horror movie marketing? If you are a blogger
(and is there anyone left in who isn’t?), you can prepare to be targeted at one point or another for a
campaign like True Blood‘s. It’s almost a horror movie concept unto
itself — the question isn’t if you’ll be targeted, but when.

The
campaign was created by the ad agency Campfire, which was founded by
the producers of The Blair Witch Project (the Grandmammy of all viral
campaigns, addressed below). More detail about the campaign
is in this New York Times article. Campfire orchestrated the whole campaign, but the decision to target me was made by a company called The Advance Guard

Founders
C.C. Chapman and Steve Coulson worked to identify influencers and get
the word out. Chapman and Coulson are no strangers to viral campaigns, but the TruBlood initiative
required an old-tech angle that proved ironically difficult. “The hard
part for us was that it was decided to send a physical mailer,” Coulson said. “That meant we had to reduce our ideal list down to those for whom
we could dig up mailing addresses, and you have no idea
how hard that was.”

(Not hard enough, apparently, because if
Advance Guard can find my home address, so can the bill collectors and
the guys serving those child paternity suits.)

The
TruBlood campaign began by mailing mysterious black envelopes with secret message written in an
ancient language. Cracking these messages revealed a site with a live Vampire gatekeeper (or maybe a better phrase would be a real-time undead gatekeeper). For three nights,
hundreds of players attempted to get past the
gatekeeper. When they finally did, they found a rich vampire
community, including videos, images and text
messages — the initial backstory to the world of True Blood.
As buzz began to grow, vials
of TruBlood were mailed out to a smaller core of influencers. In major
cities, trucks delivered TruBlood; stores carried “sold out” posters in
shop windows, etc. The campaign continued with great mock websites like trubeverage.com.

Now as fun as this sounds, all of this effort begs a basic question — why don’t you just tell us about the damn show? This is an awful lot of effort to trick people into learning about something, don’t you think? However, if True Blood is a hit, you can bet you’ll be seeing viral
campaigns for Freddy Krueger’s Outpatient Psychology franchises and
Repo LikeNu™ Reconditioned Kidneys. True Blood, of course, is not the first to roll the viral dice…

Cloverfield and Mistaken Identity
One of the all-time biggest viral coups has to be the “Ethan Was Right” viral campaign for J.J. Abram’s Cloverfield.
This generated thousands of blog posts for the viral game and had
people scrambling to identify the mythos and background surrounding the
monster. Was it alien? Was it Cthulu? The campaign like a charm — the
only thing was the campaign wasn’t for Cloverfield. It was for a card game called Alpha Omega
by Mind Storm Labs. Everyone seemed to win in this case of mistaken
identity — Abrams got street cred for a campaign that no one could
figure out how it connected to the movie, and millions of hits were
tallied by Mind Storm Labs. The irony of the situation was that Abrams
did have viral sites set up, but those didn’t catch on. Abrams has more
tricks up his sleeve for Cloverfield 2, but this case of
mistaken-identity is the second-most successful horror-movie viral
campaign of all time. The first? There’s no question about that …

The Blair Witch Project
Of course when it comes to online viral marketing, you have to talk about the movie that started the whole concept — the Blair Witch Project.
Made for $60,000 and grossing over $245 million, the movie was a
phenomenon and remains the highest-grossing indie film of all time…
and the movie itself had almost nothing to do with the financial
success. I remember a co-worker showing me a site talking about the Blair Witch, and being confused whether it was a documentary or not. That was the sweet spot right there: You weren’t sure
if this was a Hollywood film made to look like a real event, or a real
event that had jumped over to a big-screen release. That magic of not
knowing not only drove people to theaters, it had them emailing,
talking in chat rooms and showing online info to friends and coworkers.

But now that people know about these campaigns, they can’t be
replicated in the same way anymore. Viral is the first thing many people assume when they see something strange online (for example, take a look at the comments posted about this monster washing ashore in Montauk). If you need a fake campaign to
generate interest in your product, then I’m assuming your product
itself isn’t very interesting to begin with. That being said, all you
fancy pants Hollywood marketers: If you still want to go fully viral,
call The Advance Guard … they know where people live.