You call them “monsters,” but you know what? They have just as much of a right to be here as you and I. They’re here, they vote, and they love America just as much as you.

Monster-Americans are all over the place these days. They are your neighbors. Maybe you see them at PTA meetings and Little League. I’ll tell you one place you won’t see these people: Alongside the protesters that think America is a bad place. Flag-waving Monster-Americans are more involved than ever, and many of them want to help improve the country that gave them so much opportunity.

“I love my country,” said Dr. Hannibal Lecter, M.D. “This nation provided me an amazing education, the dining is just out of sight, and I can even attest to the value of our correctional institutions.”

Dr. Seth Brundle, Ph.D, is another prime example of how patriotism and activism can catch on later in life. “When I started out, I couldn’t tell you the name of a single Supreme Court Justice,” Brundle said. “But once I got that grant from the National Academy of Sciences, I came to realize just how amazing America is. I’ve gotten much more involved in the system since then. Granted, I look kind of nasty, but I volunteer a lot of time in phone banks.”

Brundle is extremely aggressive about voter registration and even toyed with a run for Congress. Many of us have heard his famous treatise on “Insect Politics.” He wanted to extend the right to vote to cockroaches, although some say he was just pandering to the millions of votes available from the underground denizens of Mimic. Still, how can we ever forget Brundlefly’s patriotic efforts to drag people into the voting booth? Give him liberty, or give him a very messy accidental biological decomposition.

Monster-Americans are also strong proponents of the nation’s moral fiber. Mike Myers and Jason Vorhees, both twenty-year members of the Republican Party, constantly practice outreach to educate teens against the evils of alcohol and premarital sex. “This is a great country,” said Myers. “But underage drinking, partying and fornication are major tears in our cultural fabric. If Jason and I have to find creative ways to get that message across, than so be it. It’s our patriotic duty and we’re happy to help.”

Patriotism Beyond Politics
This love of America extends
beyond politics, and into the organizations that keep the country
running. For example, how important is the Center for Disease Control?
Just ask Larry Talbot. Talbot, a lifelong American citizen, was
traveling in Wales in 1935 when he contracted a rare disease,
lycanthropy.

“They made a movie of it,” Talbot said of the 1941 documentary The Wolf Man.
“The royalties were great and all, but I’d give back every penny if I
could just have my old life.” Talbot has become an adamant anti-travel
activist, working with many tourism boards to promote travel at home
instead of abroad. He’s not alone. In the early Eighties, he was joined
by the family of David Kessler, who contracted the same disease before
he was shot to death in a hunting accident in downtown London.
Kessler’s story was told in the biopic An American Werewolf in London .

“If you do travel overseas, don’t make the mistakes that my dad
made,” said David Kessler, Jr. “Make damn sure you get your shots.
Britain, Wales — they are filthy places infested with things that
bite.”

America has long called out to the tired, the weak, and the poor.
Freedom of religion has brought millions to our shores. This attitude
had created an environment where people have the right to be accepted
for who they are, no matter what their color, creed, religion… or
material origin. 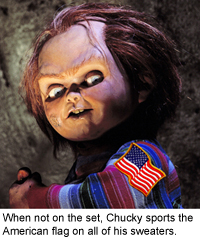 “Only
in America!” That’s a favorite phrase of “Chucky,” a three-foot-high
plastic doll that has raked in millions at the box office. “In a lot of
countries, you can’t even sell something that looks like me, let alone
me being able to go out and get work. Here, I can do whatever I want. I
freakin’ love this country, man, and I’m happy to put a toy knife in
the eye of anyone who thinks different.”

Chucky isn’t just a multi-millionaire superstar actor, he’s given
back. Along with his lovely wife, Tiffany, and their son, Glen, Chucky
is very active in the Society for Flesh Challenged Americans.

Illegal Monster-Aliens
The
American Dream is under attack, however — from illegal aliens.
Monsters come to our shores looking for a free handout, free meals, or
a city to crush. Some of these monsters even had the audacity to claim
they already are American, and that the country should just embrace them
even though they knowingly violated our immigration laws.

The prime example is Clover from Cloverfield.
His sponsor, J.J. Abrams, had made a marketing tagline out of claiming
Clover is the “first truly American monster.” Do people just
regurgitate whatever the man says? Abrams ignored procedures for work
visas, green cards, claiming that “we need our own Godzilla.” Hey J.J.,
isn’t Godzilla Japan’s own King Kong? You know, that giant monster
movie made in 1933? The first solo giant monster movie? Made in… take
a guess… America? Abrams has been evasive as to Clover’s country of
origin. Did he come from the ocean? Did he come from outer space? Well
one thing is for sure, he sure didn’t come from Des Moines. Clover is
not American.

Kong, on the other hand, gave up his rights as a citizen of
Skull Island in order to become a full American. He’s got a social
security number and everything. Before you tout your anti-giant-gorilla
xenophobia, how many of you have been in the United States for 75
years? Clover isn’t even the second giant monster to trash a U.S. city,
how ’bout the San Francisco-trashing squid-thing from It Came From Beneath the Sea (1955)? And let’s not forget the giant monsters that were born in the Continental U.S. — giant ants from Them !, the proud New Mexican giant spider from Tarantula (1955), and the pin-up gal of the suffragette movement, Nancy Archer from Attack of the 50-foot Woman (1958).

So on this Fourth of July, let’s take a moment to appreciate our
Monster-American countrymen. Sure, they may look different, smell
funny, and from time to time slaughter everyone around them, but
dammit, they are people too.

No, not just people.