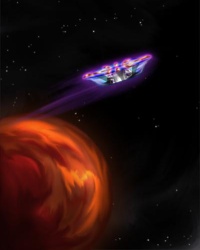 It’s a good time to be an X-Files Fan. Not only will the new movie, X-Files: I Want to Believe be in theaters July 25, but the Mars Phoenix lander discovered soil that supports alien life, better instruments helped astronomers detect 45 new Earth-like planets and a researcher from the University of Florida says he knows how to make a flying saucer. The proof is still “out there” but, for those that want to believe, science is pointing in the right direction. It will be hard for Scully-like skeptics to say there’s no such thing as a hovering, circular UFO if an Earthling is able to build one.

Subrata Roy, a University of Florida mechanical and aerospace engineering associate professor is drawing up plans to build a saucer-shaped aircraft that can hover in the air like a helicopter without any moving parts or fuel.
Roy submitted a patent application for the aircraft which he calls a
“wingless electromagnetic air vehicle,” or WEAV. “This is a very novel
concept, and if it’s successful, it will be revolutionary,” Roy said in
a UF press release.

The artist illustration included here
shows a future WEAV flying above Mars, and the mini prototype Roy’s
making to prove his theory should be done in the next year. It will be
about six inches across but theoretically, the technology would work as
well on a ship meant to transport people (or extraterrestrials). It
will be powered by magnetohydrodynamics and if you think hybrids are
different, this will seem, appropriately enough, out of this world.

Scientific American explains how it works:

The
saucer will hover and propel itself using electrodes that cover its
surface to ionize the surrounding air into plasma. Using an onboard
source of energy (such as a battery, ultracapacitor, solar panel or any
combination thereof), the electrodes will send an electrical current
into the plasma, causing the plasma to push against the neutral
(noncharged) air surrounding the craft, theoretically generating enough
force for liftoff and movement in different directions…

A
huge benefit with the WEAV is that it doesn’t need oxygen like the
combustion engine; perfect for trips outside the Earth’s atmosphere.
For shorter distances, keep this in mind: No moving parts means no
falling from the sky due to engine failure. The problem is that no
plasma-propelled aircraft has successfully taken flight on Earth, but
Roy believes the unique nature of his design will “clear the
technological hurdles and take to the skies.” Here’s to believing!